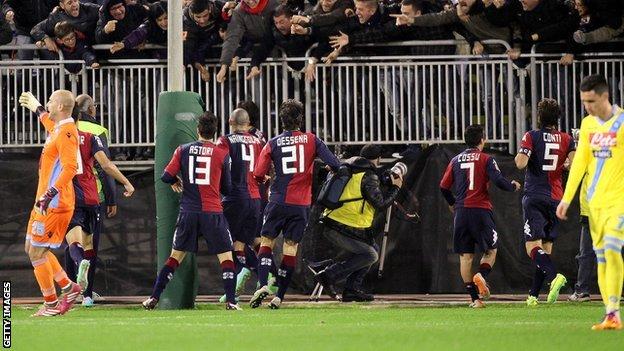 Napoli played out a disappointing Serie A draw away to Cagliari.

Mid-table Cagliari led within 10 minutes when Nene swept in under Pepe Reina but in the 19th minute Gonzalo Higuain equalised with a penalty after Goran Pandev was fouled in the box.

The visitors lost Reina, on loan from Liverpool, to what looked like a hamstring injury towards the end of the first half. The 31-year-old was making his return after two weeks on the sidelines.

Jose Callejon thought he had won the match for Rafael Benitez's Napoli with his shot from outside the box but referee Paolo Valeri was insistent that one of the Spaniard's offside team-mates in the box had got the final touch and disallowed it.

The result leaves Napoli seven points behind leaders Juventus and two off second-placed Roma, having played a game more than both.