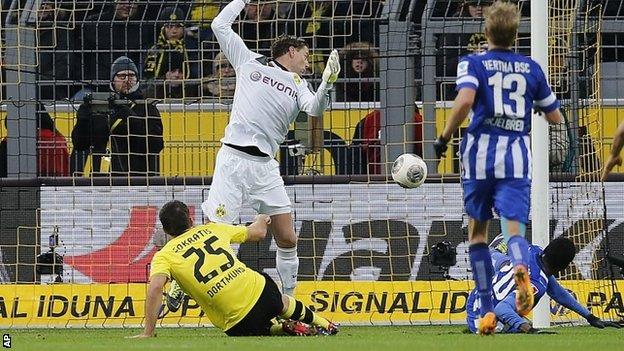 Borussia Dortmund fell to a fifth defeat of the Bundesliga season by losing to Hertha Berlin.

Dortmund pushed for an equaliser late on but it never came.

Hertha Berlin move up to sixth in the table, four points behind third-placed Dortmund, with the victory.

Dortmund had to chance to move to within nine points of leaders Bayern Munich, who are playing in the World Club Cup final. And it looked like they might do so when Hertha's 18-year-old keeper Marius Gersbeck charged out of his goal and Reus took advantage to make it 1-0 in the seventh minute.

But Ramos turned home an Allagui pass 16 minutes later to bring Hertha level and Allagui then fired past Roman Weidenfeller from close range to win the game.

Dortmund will drop down to fourth in the table if Borussia Monchengladbach do not lose at home to Wolfsburg on Sunday.