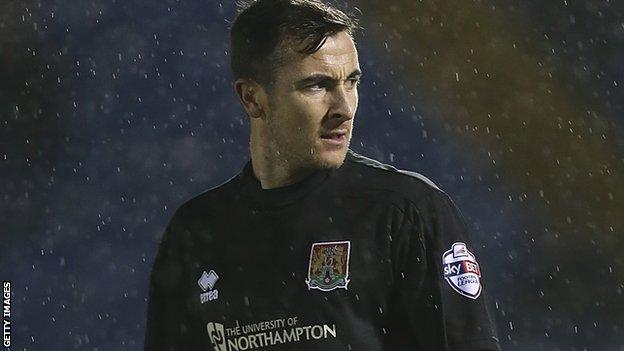 Northampton Town striker Roy O'Donovan is looking forward to a run of games after fearing he had been "forgotten" during a long injury lay-off.

The 28-year-old made his return from surgery against Bury on Saturday, his first appearance for two months.

"I was nowhere near 100% at the start of the season. I was flogging myself through it.

"I want to get back scoring, winning and getting Northampton up the table," O'Donovan told BBC Radio Northampton.

With O'Donovan returning to full fitness, the Cobblers injury list is not looking as bad as earlier in the season.

That - and their host of new signings gelling - seems to account for their improved form.

There will be big decisions to be made in the new year, though. The squad is too large, Aidy Boothroyd will have to decide on the loanees and also - I'd expect - try to tie Paul Reid down beyond January.

Last season, O'Donovan scored six goals in 19 appearances, including three in the last five matches as they reached the League Two play-off final.

At the start of this term, he continued that form when he was on target against MK Dons and Newport County despite carrying an injury.

"I had a double hernia problem and I'd had it since the end of last season," he said.

"From August onwards I was getting slower and slower - but I'm looking forward to the rest of the season. I'm optimistic."

The Cobblers are second from bottom of the table despite improved recent form including wins against Fleetwood and Accrington and draws at Chesterfield and Bury.

"There's one negative - we're not scoring enough goals and creating enough chances. That will come, as it's probably a confidence issue," said O'Donovan.

"We've got a lot of players, but we're starting to find a balance. I think that's been the manager's problem - getting the balance. Last year's team is gone, this is a new team and it's getting there.

"The team are starting to look like they know each other's game, we've got a bit more bite about us and hopefully we kick on from here."