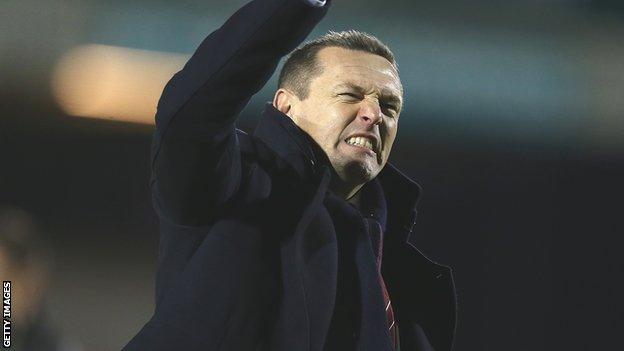 Northampton Town manager Aidy Boothroyd admits he will 'live or die' by his decisions but insists his side are fighting to escape the relegation zone.

The Cobblers have won twice and drawn twice in their last five league games, including the 1-1 draw at Bury.

Boothroyd told BBC Radio Northampton: "We showed character. I will not accept people saying we didn't put up a fight.

He added: "That [draw] keeps a little run going. We came away with a point but the players are disappointed."

Northampton are one point from safety, having been in the bottom two since September, and host Wycombe on Saturday.

They are unbeaten in five matches at Sixfields.

He said: "I can't fault the attitude and application of the players wanting to win the game [at Bury], even at the end. A weaker team would've crumbled [at going 1-0 down].

"We're in there fighting. We've not got a win but the league has tightened up a little bit more. A good result against Wycombe and everything looks a lot nicer.

"Two home wins and two away draws is, dare I say it, promotion form. But we're not in the promotion places.

"It was important that we bounced back and I think we've done that."