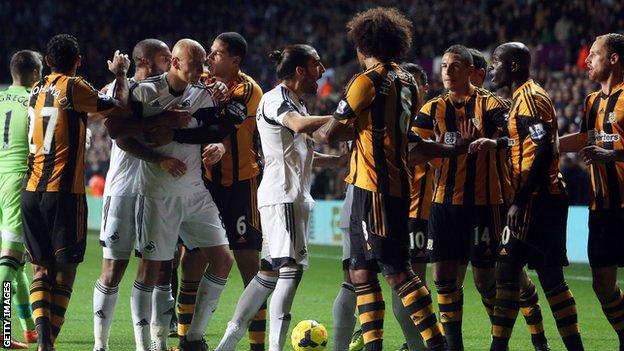 Swansea and Hull have been charged by the Football Association with failing to ensure their players "conducted themselves in an orderly fashion" in their game on 9 December.

The charge relates to an incident close to the end of their 1-1 Premier League draw at the Liberty Stadium.

Hull's Tom Huddlestone and Yannick Sagbo and Swansea's Ashley Williams were involved in a fracas.

Chico Flores then flung himself to the ground claiming Sagbo had elbowed him.

A statement on the FA's website said: "Both Swansea City and Hull City have been charged by the FA in that they failed to ensure their players conducted themselves in an orderly fashion in or around the 80th minute of their fixture."

The clubs have until 18:00 GMT on Tuesday, 17 December to respond to the charge.

The match ended in a draw after former Swansea striker Danny Graham's opener for Hull was cancelled out by Flores in the 60th minute.

Sagbo and Williams were both booked after the incident following an altercation, while Swansea midfielder Jonjo Shelvey was also shown a yellow card in the aftermath.

The game was the first Premier League match between the two sides.