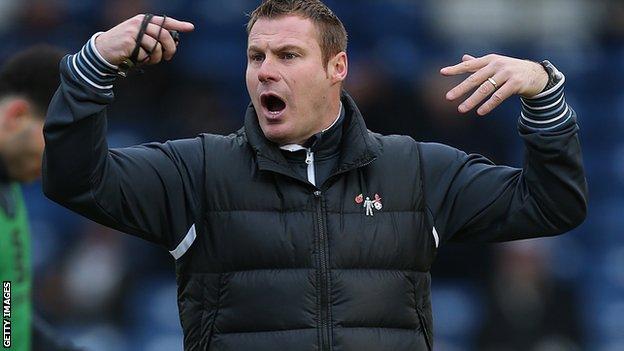 Bury manager David Flitcroft says it was not a difficult decision to come back into football so soon after being sacked by Championship side Barnsley.

"People kept saying 'you have to get away', so I was trying to get some flights when the offer came out of the blue," he told BBC Radio Manchester.

"Myself and the chairman have a clear vision of where we want to go."

Flitcroft's first game in charge of the League Two side ended in a 1-1 draw with Northampton Town, leaving them 19th in the table, just two points above the relegation zone.

The former midfielder, who made more than 100 appearances for the Shakers as a player between 2004 and 2006, was impressed after speaking to chairman Stewart Day.

"You only have to spend a short space of time with the chairman and the board and realise that if we get this right, it could be lift off. I do believe that," said Flitcroft.

"There is infrastructure being built and it is an exciting project. I have the opportunity to stamp my authority on what we are trying to do on the football pitch.

"I love developing players and staff and I have the opportunity now so I am excited by that."

Flitcroft outlined his plans for the side, after Day had said Bury "belong" in the Championship.

"I know where I want to be this season, I want to solidify," he added. "I have to make sure we get the players in the right areas and infiltrate with the precision and movement that I am trying to bring to the football club."