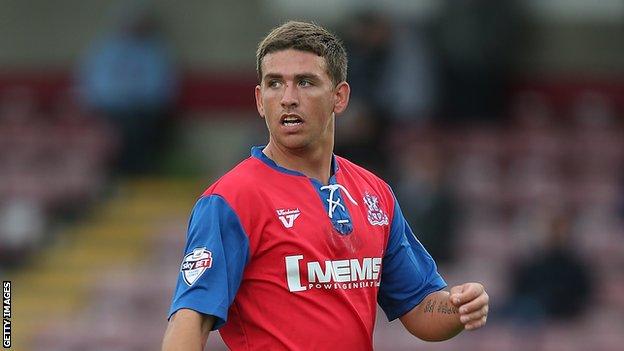 Gillingham striker Cody McDonald has praised teenager Jake Hessenthaler for the impact he has made since coming into the side.

The 19-year-old midfielder made his debut at the end of last month and has started the Gills' last two games.

McDonald told BBC Radio Kent: "He is unbelievable [with] the composure he has shown and he gets stuck in.

"He has done very well. He has given the manager no choice but to play him. All credit to him."

Hessenthaler, the son of former Gillingham midfielder and manager Andy, helped the Kent club to a 2-2 draw against Peterborough on Saturday.

Jake is lovely on the ball. If he has half of the heart that Andy had, then he will be a player

Hessenthaler senior made over 360 appearances during a 10-year stay at Priestfield and Gills boss Peter Taylor believes Jake has the potential to match his father.

"I had Andy as a player when he was 21 years of age so Jake has started off a little bit earlier," said Taylor.

"He is a little bit the same. He is going to drive me made like Andy did.

"He is lovely on the ball so he might be slightly better than Andy on the ball. He still makes some good and bad decisions.

"If he has half of the heart that Andy had, then he will be a player."

The Gills have picked up one point from their last three games in League One and are now four points above the relegation zone.

"Every game for us at the minute is important," McDonald said. "We need to open up a bit of a gap there.

"It is always going to be tight at the bottom of this league. There are some good clubs and you are surprised by some of the teams at the bottom.

"We have set our benchmark against Sheffield United and then we were disappointing against Rotherham.

"If we play like we did against Peterborough we should be fine."