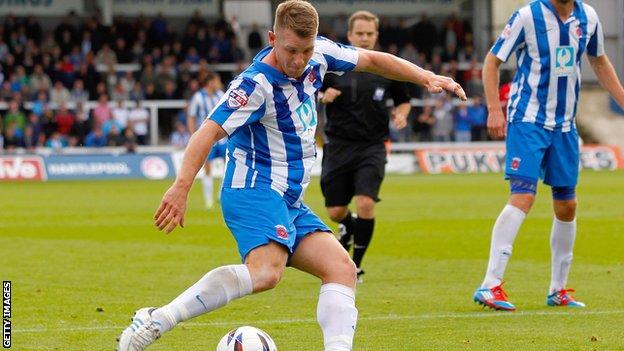 Hartlepool boss Colin Cooper has praised Jonathan Franks for his display as a centre forward at Cheltenham.

The 23-year-old usually operates on the wing, but started instead of Luke James and scored twice as Pools came from 2-0 down to on Saturday.

It was the first brace of his career, and ended a 15-match barren run.

"Franksy's looked really sharp recently and has been desperate for a chance to play down the middle - he really took his opportunity," Cooper told BBC Tees.

James, League Two's player of the month in October, is the club's top scorer this season with 10 goals.

But after netting just once in six games, the weekend trip to Whaddon Road saw his hopes for an ever-present campaign end.

"I know Luke won't thank me for not playing him," Cooper continued.

"But he has been terrific, worked extremely hard and taken a few knocks. I thought it was a chance to try Jonathan there instead."

Meanwhile, the Pools boss has confirmed he is hopeful of sorting the futures of Middlesbrough loan duo Matty Dolan and Christian Burgess before Christmas.

Their deals at Victoria Park expire in January.