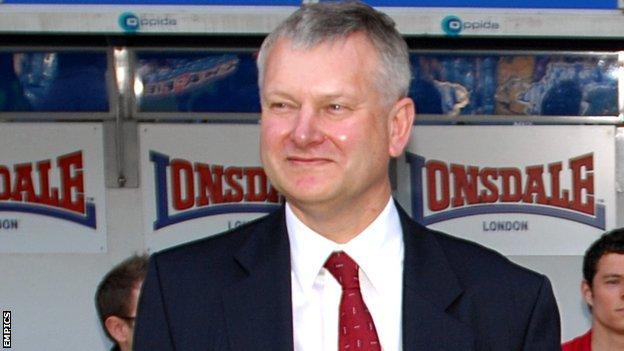 Bristol City owner Stephen Lansdown says the board should not be made 'scapegoats' for the club's decline.

Six seasons after reaching the Championship play-off final, the Robins find themselves bottom of League One, five points from safety.

Speaking to BBC Radio Bristol before Saturday's 2-1 defeat by Rotherham, Lansdown said: "We're losing games and everyone wants a scapegoat.

"At the moment it's the board, which is not the way it should be."

Steve Cotterill became Bristol City's sixth boss in three and a half years when he was appointed earlier this month, replacing Sean O'Driscoll.

O'Driscoll could not stop the club's relegation from the Championship in the summer and failed to win his first 12 games of this season.

However, the timing of his sacking in November was met with some criticism as it came after a run of four unbeaten games.

Bristol City through the years

"I was surprised by the reaction after the dismissal of Sean. Our record was poor, I don't know how you can justify it," said Lansdown.

"He was here for 10 months and we won very few games and got relegated rather tamely. We didn't make an impact in League One, where we should have done, and we didn't play very good football. Need I say any more?

"We've changed all that now and we're looking to a new start."

Billionaire businessman Lansdown became involved in the Ashton Gate outfit in 1996 and is thought to have invested £50m in a bid to take them to the Premier League.

In an interview with BBC Points West in July, he admitted he was "embarrassed" by his level of spending but they had in place a long-term sustainable plan for the club.

When asked on Saturday if recent criticism had led to him considering his position, Lansdown replied: "I'm pretty thick-skinned and when things were going well I said if it starts to go wrong people will turn on us - and they have.

"Sometimes when you read some of the comments you think: 'why should I be doing this?'.

"But I have no regrets at being involved with Bristol City. I love what we do and although it's not happening in the way I would have liked, I believe what we are doing is right.

"The longer we continue, the more convinced I am we'll get it right in the end. Bringing in Steve Cotterill will hopefully be that catalyst."