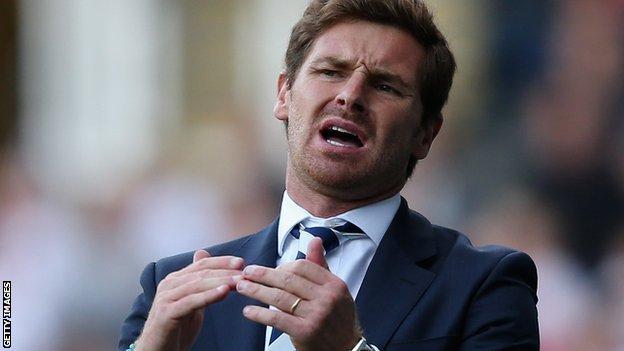 Tottenham have sacked manager Andre Villas-Boas in the wake of Sunday's 5-0 Premier League thrashing by Liverpool.

The loss was the club's worst at White Hart Lane in 16 years and left them seventh in the table - eight points behind leaders Arsenal.

"Andre Villas-Boas has been on the brink. He was summoned to meet Tottenham chairman Daniel Levy last night. But the question is where do Spurs turn to now? What is the alternative?

"In the radio interviews after the loss to Liverpool, Villas-Boas looked like a broken man. He looked like he had lost belief."

Former Chelsea boss Villas-Boas, 36, took over at Tottenham in July 2012.

"The club can announce that agreement has been reached with head coach Andre Villas-Boas for the termination of his services," said a Spurs statement.

"The decision was by mutual consent and in the interests of all parties."

Villas-Boas was dismissed by Chelsea in March 2012 after just over eight months in charge at Stamford Bridge, and he was hoping to rebuild his reputation at Tottenham.

He won 53.7% of his league games in charge, which is the highest of any Spurs manager since the Premier League era began in 1992.

But Villas-Boas had come under increasing pressure in recent weeks as his side struggled to keep pace with the top four in the league.

Tottenham lost 6-0 to Manchester City on 24 November and, despite a draw against Manchester United and wins at Fulham and Sunderland, the defeat by Liverpool proved the final straw for the Spurs hierarchy.

Villas-Boas said he would not "resign" as he was not a "quitter" after the loss to the Reds but, after being summoned to a meeting with Spurs chairman Daniel Levy, his future was taken out of his hands.

"We wish Andre well for the future," added the Spurs statement. "We shall make a further announcement in due course."

Former Tottenham playmaker and ex-England boss Glenn Hoddle has also been mentioned as a contender.

Former Spurs striker and BBC presenter Gary Lineker tweeted: "Would love to see Glenn Hoddle given another chance at this level. Has a brilliant football mind."

Italian Baldini, 53, helped oversee the club's transfer dealings during last summer when the club had to contend with the sale of Gareth Bale to Real Madrid for a world record £85.3m.

Bale scored 21 goals last season as Spurs finished a point behind fourth-placed Arsenal to miss out on Champions League qualification.

Tottenham recruited Paulinho, Roberto Soldado, Nacer Chadli, Etienne Capoue, Christian Eriksen, Vlad Chiriches and Erik Lamela with the money from the sale of the Wales international but the team has been unconvincing so far this season.

Former Tottenham chairman Lord Sugar told BBC Radio 5 live: "The money was spent irresponsibly, in the sense that you can't just go and buy, quickly, seven players and shove them into a team.

"Was the team that bad, that he needed seven players immediately?

"If you take [Arsenal manager Arsene] Wenger for example, he has taken a lot of pressure at the early part of the season, but he has spent on somebody [Mesut Ozil] that he wanted to spend on, not just spending for the sake of spending."

Villas-Boas had only managed one win from his previous six home league games, with his side scoring just 15 goals in 16 top-flight matches.

However, in contrast, Spurs won their six Europa League group games to progress to the last 32 of the competition, where they will meet Ukrainian side Dnipro.

Villas-Boas also guided Tottenham into the quarter-finals of the Capital One Cup and they face West Ham at White Hart Lane on Wednesday, 18 December.

His latest departure comes after his failure to have the same kind of impact he did in his early managerial days in Portugal.

Villas-Boas helped secure Academica's top-flight safety having taken over the side when they were bottom of the league and without a win.

He moved on to Porto where, in 2011, he won the Portuguese league by 21 points without losing a game, the Europa League with a 1-0 victory against compatriots Braga and the Portuguese Cup.