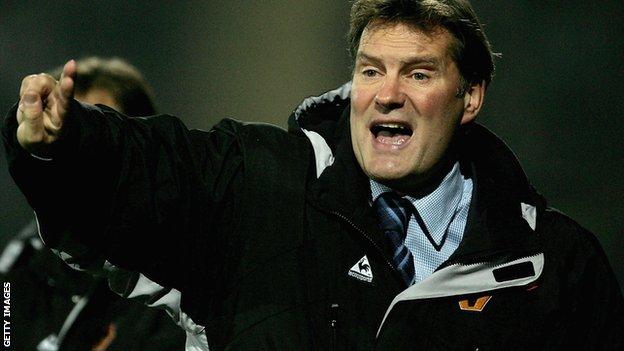 Glenn Hoddle would be willing to become Tottenham manager for a second time in a short-term or long-term capacity.

Hoddle, 56, managed Spurs between 2001 and 2003 and is among those tipped to replace Andre Villas-Boas, who was sacked on Monday.

The former England manager is interested in a return to his former club and is close to Spurs chairman Daniel Levy.

Technical co-ordinator Tim Sherwood has been placed in temporary charge.

Villas-Boas' departure after 17 months at White Hart Lane came in the wake of Spurs' 5-0 loss to Liverpool, a defeat that left them seventh in the Premier League table.

Hoddle has not managed since he left Wolves in June 2006, but has turned down offers to return to the game since, including the chance to take charge of the Ukraine national side.

He has also opened an academy in Spain which focuses on keeping released players in the game.

Former Spurs and England striker Gary Lineker tweeted: "Would love to see Glenn Hoddle given another chance at this level, has a brilliant football mind."

Sherwood will take charge as Tottenham face West Ham in the quarter-finals of the Capital One Cup on Wednesday, with other members of Villas-Boas' backroom team - Jose Mario Rocha, Luis Martins and Daniel Sousa - all also moved on.

"The club can announce that Tim Sherwood, Chris Ramsey and Les Ferdinand will take charge of the first team whilst the club progresses discussions," said Spurs in a statement.

"Steffen Freund and Tony Parks continue as part of the coaching staff."

Former midfielder Sherwood, who played 93 league games for the White Hart Lane club, is only expected to be in charge on a temporary basis as the club seek to appoint their fourth manager in six years.

The volatility in management and coaching continues to undermine the profession

Following the dismissal of Villas-Boas, 36, a quarter of the Premier League's clubs have parted company with their managers this season.

Ian Holloway, Martin Jol, Steve Clarke and Paolo Di Canio all lost their jobs since the start of the campaign, with further managerial casualties in the Football League.

In a statement, League Managers Association chief executive Richard Bevan said: "The LMA is of course deeply concerned by the recent surge in managerial dismissals.

"This is a particularly turbulent period. As it stands, 19 managers [across the top four divisions] have already lost their jobs in this campaign.

"Almost half of the managers sacked so far have been given less than one year in the job.

"The volatility in management and coaching continues to undermine the profession at a time when the game needs to continue to encourage players towards the end of their career to stay in football."