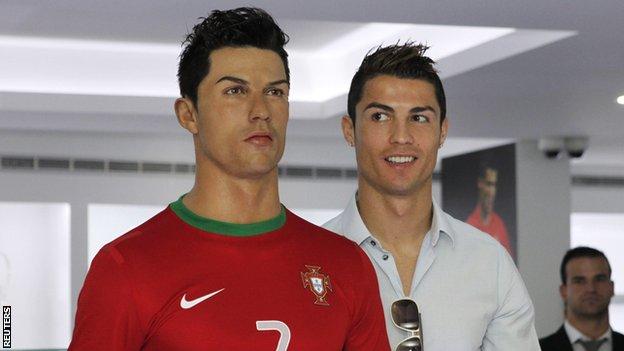 Real Madrid forward Cristiano Ronaldo has opened a museum in his honour, which he said has extra room to be filled by future trophies.

Ronaldo, 28, is currently on the three-man shortlist to be named the Ballon d'Or winner for a second time.

"It's a special day, I don't want to mention specific ones" he said. "All I want is to win more and if the Ballon d'Or comes, there is extra room here."

The museum in his native Madeira exhibits more than 125 awards.

Ronaldo won the prestigious 2008 Ballon d'Or title, formerly known as the Fifa World Player of the year title, while with Manchester United.

Before his six-year spell at Old Trafford ended with a then-world record £80m transfer to Real Madrid in 2009, he won three Premier Leagues, one Champions League, one FA Cup, two League Cups and one Fifa Club World Cup.

His success has continued in Spain, where he won the Copa del Rey in 2010-11 and La Liga in 2011-12 under now Chelsea boss Jose Mourinho.

The Portugal international opened his museum, which occupies the ground floor of a five-storey building, in front of a frenzy of reporters and fans.

"Here is the evidence of what I have won, no one will take it away from here and these were things I wanted to share with my fans, show them what I have already achieved," he said.

The first piece on display dates back to when Ronaldo was eight and top-scored in a tournament with his boyhood club Andorinha. It also contains mementos from his senior playing career, including two Golden Boot awards won for being European football's top scorer.

Ronaldo is competing with Barcelona forward Lionel Messi and Bayern Munich winger Franck Ribery to be named the 2013 Ballon d'Or recipient, with the winner to be revealed at a ceremony in Zurich on 13 January.