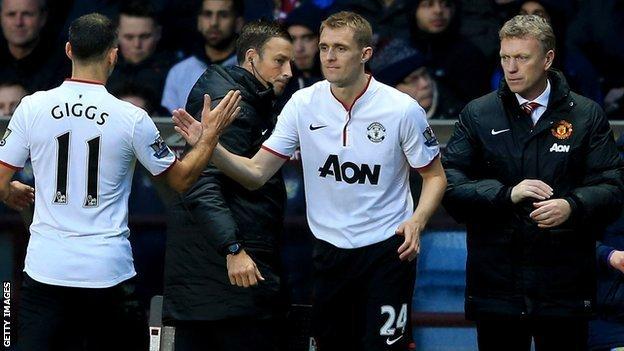 Manchester United midfielder Darren Fletcher "looked like he had never been away" on his return after nearly a year out, according to manager David Moyes.

Fletcher, 29, made his first-team comeback in the 3-0 victory at Aston Villa, coming on after 70 minutes.

His previous appearance was on Boxing Day last year, before having surgery on a chronic bowel condition.

"To recover from the illness he has, it is incredible credit," said Moyes. "I thought he played really well."

Scotland international Fletcher was diagnosed with ulcerative colitis in December 2011 but made 13 appearances for club and country in 2012-13, the last as an 89th-minute substitute in the 4-3 victory over Newcastle on 26 December.

Fletcher replaced Ryan Giggs at Villa Park on Sunday, with United leading 3-0 through two goals from Danny Welbeck and a Tom Cleverley strike.

"To people who do have illnesses, it says to keep going and believing, and Darren has done that," said Moyes. "I thought when he came on it looked like he had never been away.

"I was really impressed because we are not sure where he is. He has had a few reserve games and has been training, and you can never tell until he gets into the senior games."

But a cautious Moyes added: "I don't want to put pressure on him and say that is Darren Fletcher back because you just never know."

Victory over Villa prevented a third league defeat on the trot and leaves United eighth in the Premier League, with the Red Devils 10 points adrift of leaders Arsenal.

Moyes claimed the champions would continue to get better as they aim to claw back that deficit.

"It [United's form] continually has to improve, and it will improve. I will make sure it gets better in the coming months," he said.

But the Scot remains unhappy with the treatment of Adnan Januzaj.

Moyes described the 18-year-old winger as "an incredible talent" and fears opponents are "queuing up to see who is going to kick him next".

"He is definitely not getting protected by the officials and it's terrible what they are allowing to go on at the moment," said the United manager.

"He will say: 'Kick me again if you want and I will get up again.'"