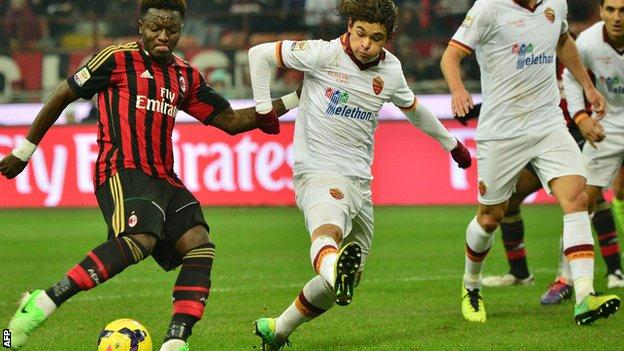 Sulley Muntari scored a second-half equaliser for AC Milan as Roma twice blew the lead at the San Siro to drop points in the Serie A title chase.

The visitors restored the lead through Strootman's penalty after substitute keeper Gabriel - on for the injured Christian Abbiati - fouled Gervinho.

The last time Roma conceded more than one goal in a Serie A fixture was a 2-0 defeat away to Palermo on 30 March.

Both sides had chances to take all three points in a dramatic finish, with Balotelli spurning the best opportunity when he fired wide in stoppage time.

The stalemate means Rudi Garcia's Roma are still unbeaten in 16 Serie A games this season, but they have drawn five of the last six and are now five points behind leaders Juventus.

The Giallorossi dominated for large parts but desperately need to rediscover a ruthless streak against Catania next Sunday - their last match before the winter break.

AC Milan, Italy's last survivors in the Champions League, climb to 10th in the table.

But Massimiliano Allegri's side have won only four times in 16 attempts in the league and now play the Milan derby against Inter on Sunday.

Allegri will be without captain Riccardo Montolivo, who is suspended after picking up his fifth booking of the season against Roma.