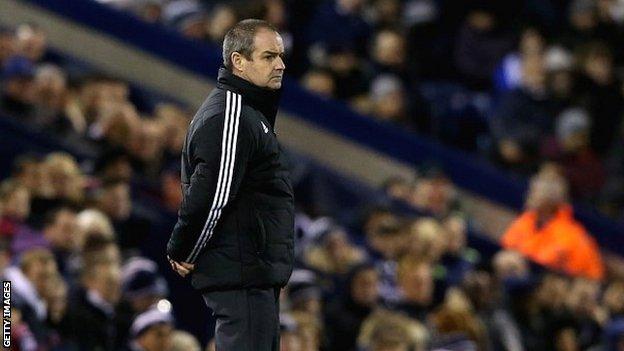 Steve Clarke regrets having "unfinished business" at West Brom, following the club's decision to sack him.

The 50-year-old was dismissed following Saturday's 1-0 defeat at Cardiff, the Baggies' fourth in a row.

"I believe I have unfinished business, so it is with deep regret that I was relieved of my duties," said Clarke.

The club achieved its best-ever finish of eighth in the Premier League last season, but won only seven of their 34 top-flight games in 2013 under Clarke.

The former Chelsea defender, who was appointed as West Brom's head coach in June 2012, described the record-high finish as something he was "extremely proud of" after succeeding Roy Hodgson who left the Hawthorns to become England manager.

"Going into this season expectations were high, perhaps unrealistically so, but with it still being only our fourth consecutive season in the top flight, our primary objective had to be establishing our status in the Barclays Premier League," added Clarke, in a statement released by the League Managers Association (LMA).

"I was, and remain convinced that we were well placed to achieve this aim."

Clarke added to his squad in the summer transfer window with the club record-signing of Stephane Sessegnon from Sunderland and the acquisition of Victor Anichebe from Everton.

He guided the side to back-to-back league wins over Sunderland and at Manchester United in September, but becomes the fourth Premier League manager of the season to lose his job.

LMA chief executive Richard Bevan said: "This season Steve has engineered some outstanding results, the 2-1 victory over champions Manchester United was their first win at Old Trafford since 1978.

"The next match was a deserved 1-1 draw against leaders Arsenal. Soon after most commentators thought the Albion were very unlucky only to get a 2-2 draw at Stamford Bridge. This is a coach who can clearly pit his wits against some of the very best in the game worldwide."

Clarke's assistant Kevin Keen was also dismissed by the club, with joint-assistant head coach Keith Downing placed in charge of first-team affairs while the search for a new head coach takes place.

Former Republic of Ireland international Reid told MOTD2 Extra: "The first half of last year, especially, showed what we are capable of. To have such a disappointing 2013 - us as players have got to take responsibility for that. It's the same squad, if not stronger now, so we are really disappointed in how it has gone."

The 32-year-old, who has made four appearances for West Brom this season, said "a drop in confidence" had contributed to their recent results but expects an upturn in form.

He said: "We are in one of those runs we are finding it difficult to get out of, but with the squad we've got, and the experience and the quality we have in the dressing room, we are more than confident we can get out of it.

"If the manager goes, you look at yourself and whether you could have done any more as a squad? The first person you have got to look at is yourself and not the manager."