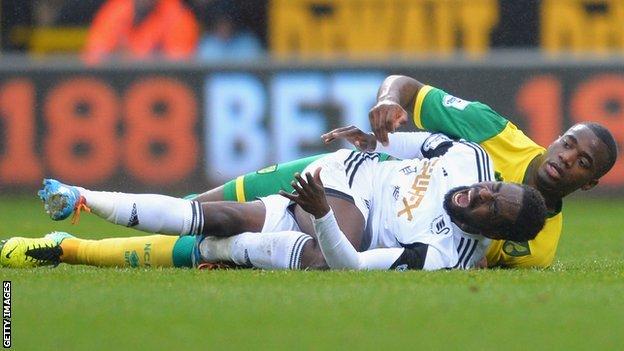 Swansea winger Nathan Dyer has not broken his ankle but did suffer ligament damage in Sunday's 1-1 Premier League draw at Norwich.

He was injured when his ankle gave way as he landed awkwardly after an aerial challenge with Sebastien Bassong.

A series of scans revealed Dyer, 26, has "a ruptured lateral ligament".

But Swansea said: "The news is positive after the club feared the worst when Dyer was transferred to hospital at half-time in severe pain."

Dyer, who had given Swansea an early lead, was given oxygen before leaving the pitch on a stretcher and being taken to hospital in an ambulance.

In addition to his ruptured lateral ligament Swansea revealed there is "further damage to two other ligaments".

"Dyer will see another specialist in the next few days after the swelling has gone down before confirming how long he'll be ruled out for," added the club.

Swansea remain 10th in the Premier League after earning a point at Carrow Road but manager Michael Laudrup said the injury put the result into context.

"That will overshadow everything else," said the Dane. "It is just a game of football - the health of a person is the most important thing.

"That game of football we controlled quite well in the first half and then just before half-time, after the injury, we had 10 minutes where we lost a little bit of perspective and they scored a fantastic equaliser."