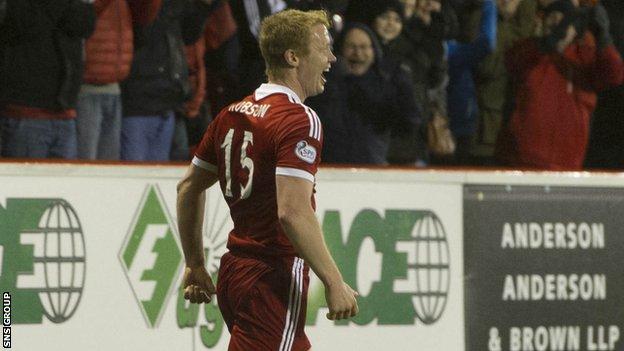 Barry Robson insists his goal direct from a corner in Aberdeen's 2-0 win over St Mirren was no fluke.

With the Dons ahead thanks to Scott Vernon's first-half goal, Robson doubled the hosts' lead from a 66th-minute set-piece.

"Of course I meant it," he said. "You can check the record books, but I think I've scored a few direct from corners.

"You know when you can hit a dangerous area and the wind is there you've always got a chance."

The win keeps the Dons among the pack chasing second place in the Scottish Premiership, three points behind Inverness CT and level with Dundee United.

"It was a good goal, but it was a decent performance from the lads in the weather conditions," added the 35-year-old midfielder.

"The manager made the point to us well before the game that the weather would be no excuse - both sides have to play in it, so let's come back in here with no regrets and thankfully we did.

"We went about our business the right way. St Mirren came up and battled hard, but so did we. We were prepared for it and deserved our win in the end."

Three of the Dons' next four games are against sides near them in the table, including Robson's former clubs Inverness and Dundee United, but he is sure they can continue their good form over the busy festive period.

"I don't think it defines our season," he said. "All of the top six seem to be winning at the moment but we're up there on merit. It's an old cliche but it is just one game at a time.

"It's a massive game for us next weekend and that's all we're focused on. We know how good Inverness are and we know it'll be a tough place to go. There'll be no excuses, we'll try our best and hopefully take home some points."