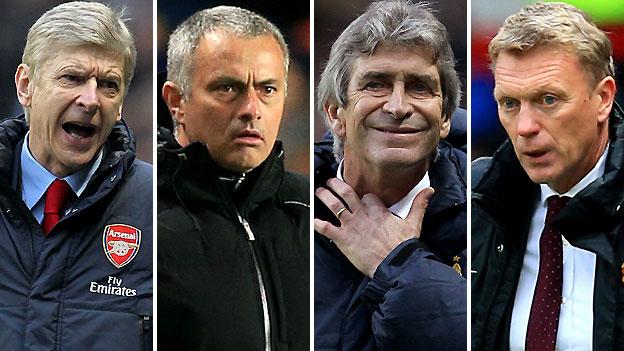 Manchester City have been drawn to face Barcelona in the round of 16 of the Champions League.

Arsenal have been drawn against current holders Bayern Munich.

Chelsea, the 2012 winners, face Galatasaray and Manchester United will meet Greek side Olympiakos.

"The Champions League draw is the perfect illustration of the perils of finishing second in your group as the reward for Manchester City and Arsenal is a last-16 meeting with Barcelona and holders Bayern Munich.

"Manchester United and Chelsea fulfilled their part of that bargain and will feel confident of winning. Manchester City's sheer attacking firepower will give them real hope against Barcelona - with the Spanish media already making it clear they would have preferred to avoid a trip to Etihad Stadium.

"As for Arsenal, they at least have memories of a Champions League win against Bayern in the Allianz. Manager Arsene Wenger will know the scale of their task but they have already won away at last season's runners-up Borussia Dortmund in this season's competition."

Chelsea and Manchester United have the advantage of playing the second leg at home after winning their groups, while City and Arsenal will have to travel away for the second legs of their ties.

City beat Bayern Munich 3-2 in their final Group D game and could have topped their group had they won 4-2.

Their manager Manuel Pellegrini said: "I think Barcelona will be very concerned that they have drawn us. They are not the team of two years ago."

"Our manager knows perfectly Barcelona because he managed in Spain for a long time. In this sense, we are confident.

Arsenal won 2-0 at Bayern Munich in March but went out on away goals in last season's quarter-finals following a 3-1 defeat in the first leg, with the Germans going on to beat Dortmund in the final.

Bayern have also knocked the Gunners out of the tournament on their two previous meetings.

Bayern captain Philipp Lahm said: "It's a prestigious tie but a tough opponent. It was the hardest draw amongst the second-placed teams. Arsenal are certainly not a team you'd hope to face."

Chelsea will face Didier Drogba for the first time since the Ivorian striker left Stamford Bridge after eight years in 2012.

Blues manager Jose Mourinho claimed last week that a meeting with Drogba and Galatasaray was the draw he wanted.

Manchester United, who finished top of their group, have won each of their four previous meetings with Olympiakos.

Champions League round of 16 draw: