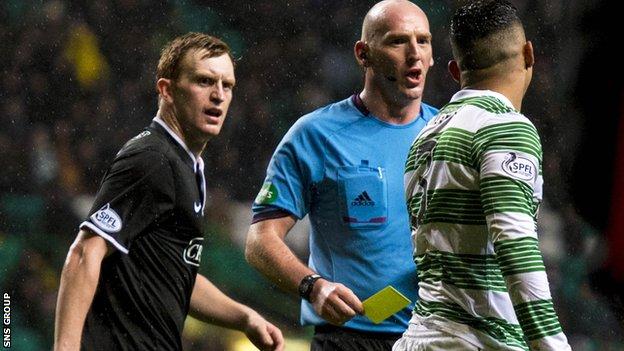 Lennon reacted angrily to the 76th-minute caution, earning a touchline talking to from Madden.

But on review he conceded the official had made the correct call.

"I got it wrong, he quite rightly booked Emilio," said Lennon. "It was an excellent refereeing decision and I thought he had a good game."

With Celtic leading thanks to a first-half strike from Teemu Pukki, Honduras international Izaguirre went tumbling in the opposition penalty box after going past defender Michael Nelson.

After Madden brandished a yellow card, Lennon threw his jacket off as he moved down the touchline venting his anger.

Celtic held on to take maximum points and, having seen a replay of the incident, Lennon was contrite, although Izaguirre escaped criticism.

"I thought it was a penalty but looking at it again it is clearly not so the referee got it spot on," he added.

"It is a natural reaction (from Emilio), there was a leg dangled out and he went over it so I don't think I need to speak to him."