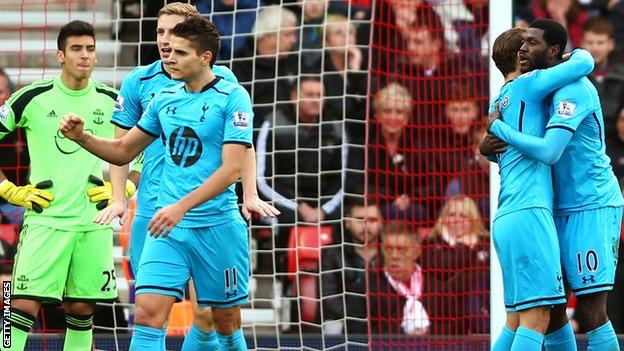 Adebayor's close-range volley made it 1-1 and an unfortunate own goal from Jos Hooiveld put the visitors ahead.

But Saints striker Rickie Lambert levelled after fine play from Lallana, before Adebayor curled in the winner.

The Togo striker had only made one substitute appearance in the Premier League this season under Villas-Boas.

Defeat means Southampton, who were third at the start of November, have now failed to win in six games, their joint worst run since Mauricio Pochettino became manager in January.

Victory for Spurs boosted Sherwood's hopes of getting the manager's job on a long-term basis, after making clear his interest in replacing Villas-Boas earlier in the week.

If Sherwood does get the job, then on this evidence Spurs fans can expect a great deal of excitement and attacking play.

Tottenham made six changes to the side that lost 5-0 to Liverpool in their last Premier League game.

"It was Tim Sherwood's first league match in caretaker charge and what a much-needed win that was for Tottenham after a troubled week.

"Emmanuel Adebayor, brought back in, rewarded Sherwood's faith with two goals, but Southampton are now without a win in six matches."

Sherwood, who took charge for the 2-1 League Cup defeat at home to West Ham on Wednesday, picked an attacking line-up that included no recognised defensive midfielder.

That lack of cover proved costly as his side fell behind after less than quarter of an hour.

Southampton's Danny Fox passed to Lallana, who was allowed time to turn, run at goal and shoot low past goalkeeper Hugo Lloris.

That setback prompted Sherwood to race down from his seat in the stands and take up a position on the touchline.

Before the match, the Spurs interim coach had said his side would face few problems if they kept hold of the ball, but the hosts nearly doubled their lead after Danny Rose lost possession to Lambert.

He passed to England international Lallana, who released Jay Rodriguez only for the striker's curler to drift narrowly over.

Two minutes later, Sherwood's side were level as Adebayor stretched to volley in Roberto Soldado's excellent cross from the left wing for his first league goal since 12 May.

Spurs then went ahead in fortunate circumstances early in the second half when Saints centre-half Hooiveld scored an own goal.

Christian Eriksen played the ball to Rose, whose pull-back was prodded into the net by Dutchman Hooiveld, the ball squirming underneath goalkeeper Paulo Gazzaniga.

Tottenham's lead lasted only five minutes as they conceded the 18th goal in their last seven league matches. Lallana raced through and pulled the ball back to Lambert, who had the simple task of finding an empty net with Lloris stranded.

Before the game, only five teams had scored fewer league goals than Tottenham.

But they got their third of the afternoon when Adebayor capitalised on some indecisive Southampton defending from a throw-in to curl the ball past Gazzaniga.

Soldado then missed two further chances to increase the advantage.

"At 1-0, we had the game under control and we could've gone 2-0 ahead, but we conceded and practically gifted them a goal.

"In the second half, we dressed up as Santa Claus and gave them many presents. We made many mistakes and when you make these mistakes, you are punished. We are obviously very angry.

"At the beginning of the second half, we were controlling the game, but we conceded the second goal and it was hard to get back in the game. We were risking a lot.

"We just have to keep on working as a team. Before we had a run of seven games winning and were looking up. Now we are on the wrong side and the only thing we can do is keep working."