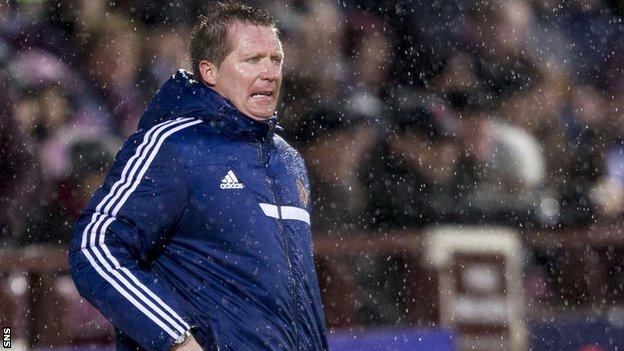 Hearts manager Gary Locke praised the ability of Inverness striker Billy McKay as his side succumbed to two goals from the player in their 2-0 defeat at Tynecastle.

McKay's brace in the win for John Hughes' men took his tally to 15 this season and kept Hearts rooted to the foot of the table on -3 points.

"I didn't think there was anything in the game at all," said Locke.

"But two bits of brilliant from Billy McKay has won Inverness the points."

Jamie Walker was withdrawn at half-time with an Achilles complaint and Locke admits the winger may be the latest name added to a growing injury-list, with Ryan Stevenson, Jason Holt and Mark Ridgers already on the treatment table.

It's been difficult, there's no doubt about that - but we've just got to keep going

"It's important that we don't let the heads drop," said Locke.

"It's difficult at times because we had another young side out today.

"I don't think there's a lot between the teams in the league, but when you've got strikers like that, you've always got a chance, and unfortunately for us, the players that are capable of getting us a goal are injured."

Despite the loss, Locke is confident his players can keep their morale high and claw back the points necessary to push back up the table before the season is out.

"The work-rate effort and commitment is there, it's just that bit of quality in the final third. Unfortunately for us, the boys who have produced that for us this season are injured.

"It's been difficult, there's no doubt about that - but we've just got to keep going.

"We're a really young side, but I thought today we applied ourselves and competed well against a good side.

"We need to try and keep being positive all the time and hopefully we can turn it around."