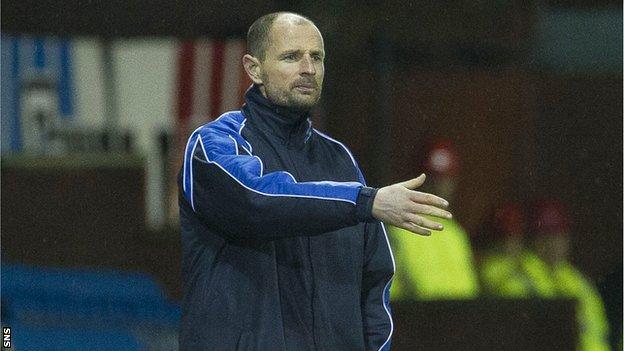 Kilmarnock manager Allan Johnston highlighted the quality of midfielder Craig Slater rather than dwell on the 4-1 home defeat by Dundee United.

Johnston thought his side were up against it once Gabriel Reuben was sent off after only 23 minutes.

"One of the big positives for me was young Craig Slater," he said of the 19-year-old.

"I thought he was fantastic. We were down to 10 men and he was running the game for us."

Nigeria international Reuben was the man making Kilmarnock tick until his sending off, but thereafter it was left to Slater to battle it out with United's talented young midfield.

"He was absolutely brilliant and that shows the quality he's got," said Johnston.

Many Kilmarnock fans, who have protested against the current regime in recent weeks, had again left the ground long before the final whistle, but Johnston defended his side.

"A little bit naive chasing the game - that's the only thing you could criticise the boys for," he said.

"But before the sending off there's much in the game at all. It was very even."

Johnston was not willing to blame the defeat on Reuben, who had publicly criticised the manager and asked for a transfer before eventually making his debut last month.

"I thought the first booking was very harsh," said Johnston. "The referee looked very quick to get the cards out and book one of our players.

"But I suppose the referee is closer to the action than us.

"I can't really complain about the second booking and it was just frustrating to get somebody sent off so early because it spoils the game for everyone because at that point we've got to sit back and restrict them and try to hit them on the counter.

"It was a great effort and I can't fault them as they worked extremely hard and restricted them to very few opportunities until we switched off at the first goal.

"The second one, we were a little bit naive, trying to win the ball back high up the pitch and that's what United are good at - on the counter - and we got punished for it."

Johnston thought that namesake Chris had a good call for a penalty turned down by referee Euan Norris when the midfielder's shot struck a United hand.

"He thought it was unintentional, but it is a big decision to make, especially at 1-0," added the Killie manager.