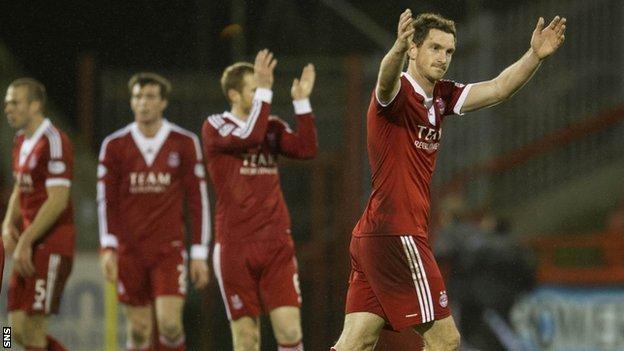 Aberdeen manager Derek McInnes says the 2-0 win over St Mirren was the most pleasing three points of the season.

A goal in each half from Scott Vernon and Barry Robson ensured the Dons remain fourth in the Premiership.

"Of all the victories we've had this season, that is the most pleasing for me," McInnes told BBC Scotland.

"Because we knew what we were up against: a team on form; we're expected to come and win here [at Pittodrie]; and tough conditions."

Aberdeen have now won their last three games, with this one coming in spite of severe winds in the north-east of Scotland.

"We had it all to do and the players stuck to their task brilliantly," said McInnes.

"That for me is the most pleasing three points of the season. We created a few opportunities and I think we were worthy winners.

"Given the conditions, there was still some good football played."

The Dons played a front three of Niall McGinn, Vernon and Peter Pawlett. Meanwhile, in midfield McInnes was pleased to have the trio of Willo Flood, Robson and Ryan Jack operating efficiently.

"Scott got his goal today, which we're all pleased about," said McInnes. "It was a fantastic finish.

"The biggest part of it was his bravery; he knows he could get clattered with the centre-back and [Marian] Kello closing him down and he's got the wherewithal and composure to get it into the back of the net."

Robson scored the second direct from a corner kick and should be credited with it despite Vernon claiming he touched it.

"We brought him [Robson] to be a threat for us in open play," added McInnes. "But also a huge part is his threat from set-plays.

"We scored from one of his deliveries against Partick, he was a constant threat with his set-plays against St Johnstone last week, and today we've managed to get a goal from it as well."