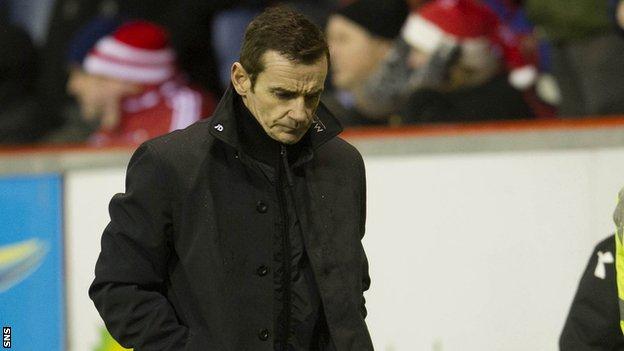 St Mirren manager Danny Lennon says the weather had an adverse effect on the 2-0 defeat by Aberdeen at Pittodrie.

Scott Vernon and Barry Robson found the net in either half as Lennon's side suffered their first defeat in four matches.

"I think people travelling along today and the media saw it as a good spectacle for a good football match," said Lennon.

"But we never got that, but both teams did try."

A blunder in the St Mirren defence allowed Vernon in to fire in the first-half opener, before Robson sealed the win with a spectacular corner that swung directly into Marian Kello's net.

Lennon also bemoaned a decision by the referee not to award a Steven Thompson shot at the near post that landed in the back of the net after a linesman flagged for offside.

"The conditions had a major impact on the game today and it was the difference between two very good sides on good form," said Lennon.

"The wind and the conditions had a big impact on both goals we lost.

"Having said that, I would like to have seen a big decision that went against us in terms of the goal when it was 0-0.

"I've seen the playback and it's a tight one. If that goes in, goals do change games.

"What we have to do is take this defeat on the chin."

Up next for the Buddies is a trip to Fir Park to take on Motherwell, a team pressing Aberdeen in the top six of the Premiership table, and Lennon insists his players are looking to mirror the top clubs in terms of their performances over the course of the season.

"We're playing a lot of teams in the half of the table where everyone wants to be," said Lennon.

"Looking at Aberdeen and how Derek has them playing, how well his staff have been doing, they've got the makings of finishing behind Celtic this season.

"They're playing good football, scoring goals, they're difficult to beat and they're not conceding many goals.

"That's the type of form we want to get back into ourselves, and if you're going to have a season of note, that's the form you have to hit."