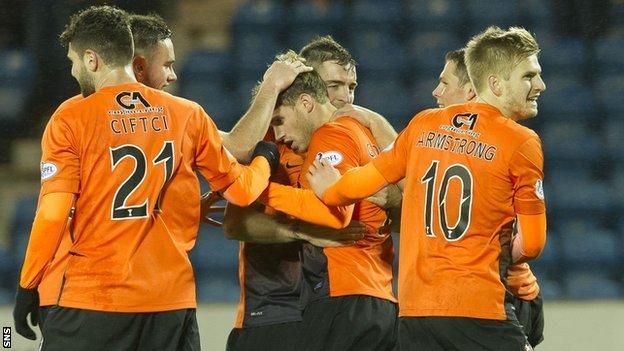 Patience was the watchword for Dundee United manager Jackie McNamara, not only in terms of goals against Kilmarnock but for those left out of his side at Rugby Park.

United took until the 60th minute before subduing the 10 men and going on to win 4-1.

"Mark has not done anything wrong to be left out," said McNamara.

"And I told him the importance of using the both of them in the next two weeks with the four games in a short spell."

Both players have had their injury problems and the manager stated: "The two of them will find it difficult to play all the games with a couple of days' rest.

You see a couple of lads on the bench looking down because they're not getting on, so it is about trying to keep everybody happy and pushing for a place

"That was my thinking with getting Keith, who hasn't done much wrong to be left out, in today to keep him fit and pushing Mark for a place.

"You see a couple of lads on the bench looking down because they're not getting on, so it is about trying to keep everybody happy and pushing for a place."

It was the fifth game in a row in which United have scored four goals or more and they are closing in on matching a six-game spell of high scoring back in 1936.

"That's something we've got in our system now. Even the boys who come on want to press and want to score goals.

"Sometimes you look at the elements with the wind and the rain and you're trying to play football and I thought we were a bit condensed in the first half, everything through the middle.

"I thought it was important to try to turn them and every time we did get round them, they brought us down and the boy got sent off and Pascali got booked."

McNamara thought the red card shown to Nigeria midfielder Gabriel Reuben had been the correct decision.

"There were a few bookings there and I thought the referee was spot on with them," he said.

"I know Kilmarnock are complaining about the lad being sent off, but Stuart Armstrong's away and I don't think you could complain about the bookings the referee has given.

"Again, patience was key and there was a good pass inside to Stuart to put the ball to the back post for our right-back to put it in, which shows how patient we were to get our full-back up there to put it in from a couple of yards.

"Patience and concentration were key to the win.

"I was confident of scoring, whether it be the first minute or the last minute."