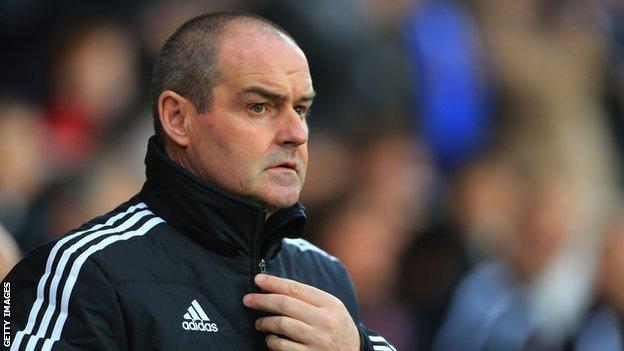 The 50-year-old Scot's last game in charge was a 1-0 defeat by Cardiff on Saturday, which left the Baggies two points above the relegation zone.

"The 20% win percentage in 2013 is a major blow to the club's prospects. They put a lot of money into the first-team squad. They smashed West Brom's transfer record twice in the space of a couple of hours before the window shut.

"Having followed West Brom for over 40 years, I believe this is the best squad since 1981-82 and I think they are underachieving.

"Roy Hodgson left behind a professional outfit. Under Steve Clarke, when West Brom were at their best, they were more attractive than when they played under Hodgson, but they were less difficult to beat. Jeremy Peace likes his seat at football's top table and it would not sit well with him if they got relegated."

Albion have won only seven of their 34 Premier League games in 2013.

Joint-assistant head coach Keith Downing will take control of first-team affairs while the club look for a new head coach.

A West Brom statement said Clarke has been placed on gardening leave with immediate effect, along with his other assistant, Kevin Keen.

West Brom sporting and technical director Richard Garlick said: "We have reluctantly come to the decision to relieve Steve of his duties after very careful consideration.

"It has been well documented that we have not had the rub of the green in certain games this season but that does not cloud the generally disappointing points return during this calendar year.

"This club's track record proves we do not take such decisions lightly, having only enforced a change in this position three times in approximately 14 years.

"But with key games coming thick and fast, we felt it was important we acted now to give the club the best possible chance of a successful outcome this season.

"Our player wage bill is the highest in the club's history and we feel we have built a squad capable of being very competitive in the Premier League."

West Brom were eighth last season - their best Premier League finish - but have struggled this term without the goals of striker Romelu Lukaku, who was on loan from Chelsea.

They invested heavily in the summer, signing attacker Stephane Sessegnon for a club-record figure and Everton striker Victor Anichebe for a fee which could rise to £6m.

Clarke, who took over at The Hawthorns in June 2012, was out of contract at the end of the season and becomes the fourth Premier League manager to lose his job this campaign, with all four of those teams in the division's bottom five.

"I feel sorry for the manager," Mulumbu tweeted. "Us players are on the pitch but he's the one who's getting the consequences of our bad play. I wish him all the best for the future."

Match of the Day pundit Alan Shearer said Clarke is unlucky to lose his job.

"It's very harsh," Shearer commented. "They overachieved last year and that put pressure on him. When you have a slow start to the season questions will always be asked. The chairman might look at it and think other clubs have improved [after changing manager]. But even so, you have to say it's extremely harsh."

Clarke replaced Roy Hodgson at the Black Country club after his predecessor was appointed England manager.

It was Clarke's first managerial role, having previously been assistant manager at Chelsea, West Ham and Liverpool.