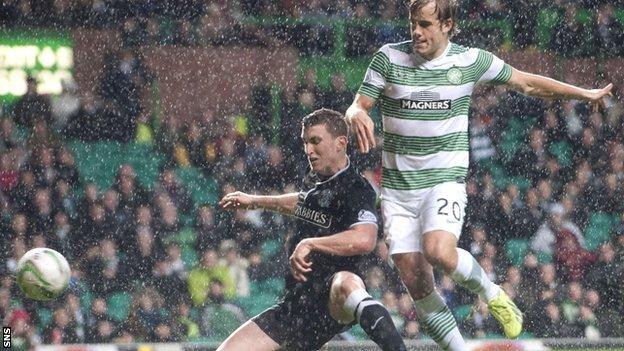 "We got what we deserved and I'm really pleased for Pukki to get his goal," said the Celtic manager.

"We think he's going to be a really good player.

"He's maybe not at the level everybody thinks he should be at at the minute but we feel he can get there."

The Finn converted Joe Ledley's cross in the 29th minute for the only goal of the game, a result that keeps Celtic nine points clear of second-place Inverness, who were 2-0 winners at Hearts.

"Strikers live on goals and confidence and that will do him the world of good," added Lennon on Pukki, who struggled to make an impact at the Nou Camp in midweek.

"He's a good kid. He's made a contribution and hopefully he'll kick on from that."

Lennon felt his team played "reasonably well" in the first but half but tired in the closing stages. However, the manager said his players could be forgiven for their fatigue, given their arrival home from Spain early on Thursday morning.

He continued: "It's a brilliant win but it takes two teams to make a game.

"Hibs were camped in and we had to do all the running to try and make a game of it.

"Our goal ratio at home is lower than it is away. Teams are making it very difficult to break them down but it's 15 unbeaten now - 12 wins and three draws - and I can't really ask for much more.

"We are really stretched with injuries at the moment.

"There's no midweek game this week and that will do the players the world of good."

With the Green Brigade not in their usual section 111 at Celtic Park it was left to other home fans to create the noise to encourage the team.

"I thought some of the supporters really tried to make the atmosphere so I can't thank them enough," said Lennon.

"In awful conditions, I'm delighted with the turn-out we got today."