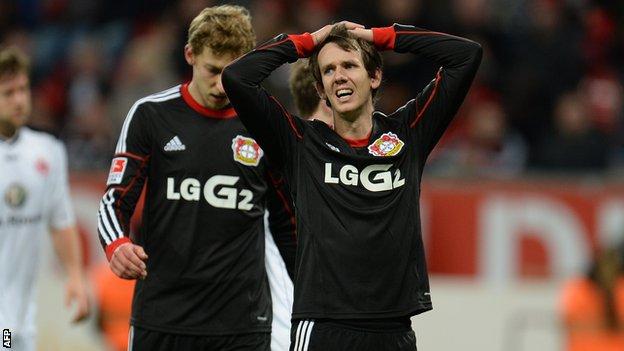 Bayer Leverkusen lost ground on leaders Bayern Munich as they fell to their first home defeat of the season in the Bundesliga against Eintracht Frankfurt.

Midfielder Marco Russ headed in the only goal, with Joselu also missing an injury-time penalty for the visitors.

Ex-Liverpool defender Sami Hyypia's side had reached the knockout stages of the Champions League in midweek.

But they now find themselves seven points behind Bayern, in second place in the table after the loss.

Leverkusen had pushed for an equaliser at the death, with their nine-goal top scorer Stefan Kiessling and Omer Toprak wasting opportunities before they conceded a penalty when they were caught on the counter-attack.

Their only other home loss this term came in the Champions League group stage, when they were thrashed 5-0 by Manchester United.