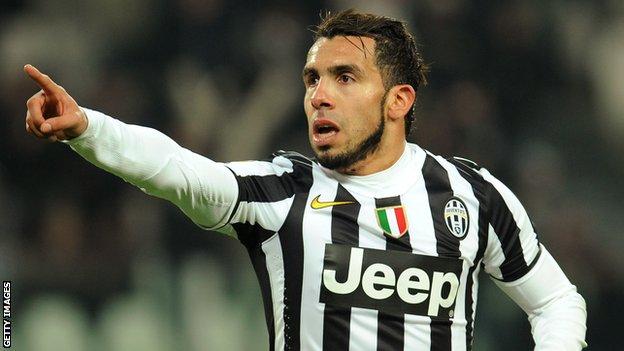 Carlos Tevez scored a hat-trick as Juventus went six points clear at the top of Serie A with an easy win over lowly Sassuolo.

The Argentine opened the scoring after a fine 15th-minute move involving Fernando Llorente and Arturo Vidal.

Defender Federico Peluso made it 2-0, with Tevez netting his side's third goal just before half-time.

Juventus have won eight league games in a row since losing at Fiorentina on 20 October, scoring 19 without conceding.

Former leaders Roma, whom Juve host on 5 January, can cut their lead to three points if they win at AC Milan on Monday.

But Antonio Conte's side are in formidable domestic form going into the winter break, which starts after next week's game at Atalanta.

And this was just the response Conte demanded after the two-times European champions exited the Champions League after losing to Galatasaray in Turkey in midweek.

Tevez, 29, has now scored 10 goals in 22 appearances since joining Juventus from City in June for £12m.