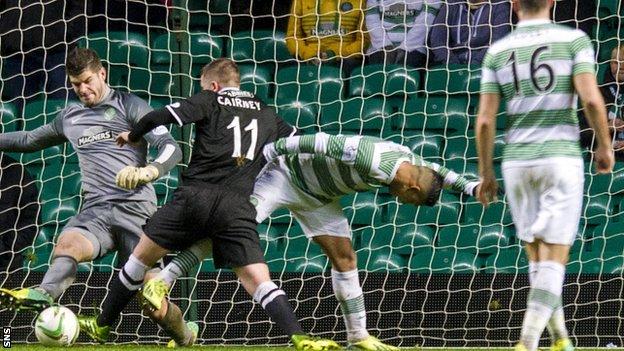 Hibernian manager Terry Butcher says several of his current players could stay in his long-term plans.

A solitary strike by Teemu Pukki denied them getting a point in a 1-0 loss to Celtic in Glasgow.

"Some of these boys, the way they're playing and applying themselves, they're working their socks off," Butcher told BBC Radio Scotland.

However, Butcher, speaking after his first defeat as Hibs boss since taking over in November, will still look to strengthen his side during the January transfer window.

"I'm excited by what we can bring in and by what we've got here as well," he said.

The Easter Road side remain seventh in the Scottish Premiership after their fruitless trip to Celtic Park, but the former England captain was content with how his charges performed.

"Neil [Lennon] was saying 'put the ball in the corner' so that's an obvious sign they wanted to protect their 1-0 lead," he said.

"It's nice when they're doing that because we were doing a lot right in that second half. We had a right go in many respects, but it's just that belief in the final third."

"We make a mistake on the far side and Celtic punish us, that's the difference," added Butcher.

"We restricted Celtic to long-range shots but just couldn't get that equaliser ourselves.

"We've had shots and corners. Celtic haven't had a shot on target and then they score from nothing, from our mistake.

"We should've got something from the game. We're still progressing and I can see some good signs there."