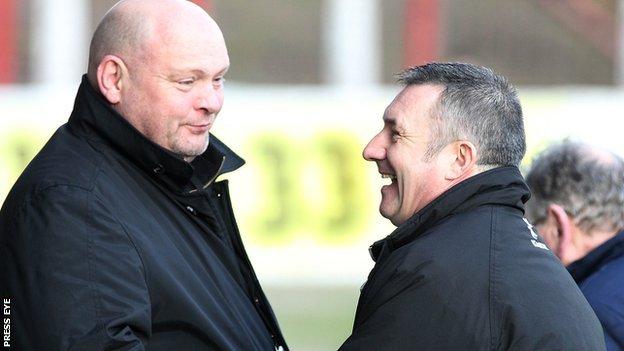 Linfield manager David Jeffrey has apologised after a video was posted on YouTube showing him singing a song about Glentoran player Jimmy Callacher.

Callacher is set to leave Glentoran after turning down a new contract and rivals Linfield are understood to be interested in signing the defender.

Jeffrey is heard singing "thank you very much for Jimmy Callacher" and "thank you Glentoran".

Linfield said they would deal with the matter under their disciplinary code.

The rivalry between Belfast's Big Two is the biggest in Irish League football and the video could raise tensions ahead of their traditional Boxing Day showdown.

When news of the video broke on Saturday, Jeffrey and the Windsor Park club reacted quickly in an attempt to maintain good relations with Glentoran.

"This was a clip at a private function which was an innocent response to some very good natured Glentoran banter," said Jeffrey.

"Unfortunately, it has been taken totally out of context.

"The stark reality is when I look at it I am terribly embarrassed, regardless of the context.

"I'm dreadfully sorry and I want to apologise to Glentoran, Eddie Patterson (team manager), Jimmy Callacher and our supporters for any embarrassment that has been caused."

Jeffrey has been manager of the Blues since 1997 and has won nine league titles to go along with seven Irish Cup triumphs.

However, he could face punishment from the club after it released a statement about the video on Saturday evening.

"The Board of Directors find the content of this video to be deplorable, deeply embarrassing and contrary to the best traditions of Linfield Football Club," it said.

"The matter will now be subject to the club's own internal disciplinary procedures and no further public comment will be made."