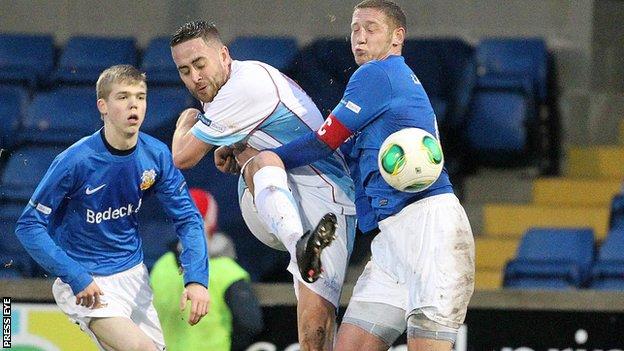 Chances were few in the first half with Glenavon's Gareth McKeown seeing his shot deflected over while Gary Thompson missed the target when well placed.

United keeper Dwayne Nelson made a fine save to keep out Ciaran Martyn's shot before Neill was dismissed on 67 minutes for two yellow cards.

Nelson made another excellent save from a McKeown free-kick.

Glenavon hammered the Sky Blues 7-0 in the corresponding fixture last season but there was little likelihood of a repeat in this lacklustre affair.

The strong wind caused both teams problems and opportunities were at a premium at Mourneview Park.

Andy McGrory fired over for hosts in the first half and the Lurgan Blues posed the greater threat in the second half, despite Neill's red card.

Rhys Marshall failed to keep his header on target from McKeown's long throw-in while Nelson needed to be in top form.

Glenavon did find the net but Gary Hamilton's strike was ruled out for offside and they have now gone seven league games without a win.

Hamilton's side remain sixth while Ballymena have moved up one place to eighth.