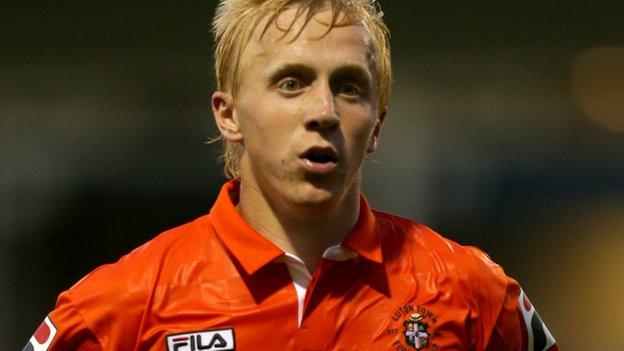 Mark Cullen's header and a Neil Ashton own goal saw Luton knock holders Wrexham out of the FA Trophy.

The home side went ahead when Cullen met Shaun Whalley's corner at the far post to head past Andy Coughlin.

Ian Rees's deflected shot hit the post but Wrexham failed to test Elliot Justham on a dismal afternoon for Andy Morrell's side.

Jay Harris was sent off after receiving a second yellow card before Ashton scored an own goal.

Ashton put the ball into his own net following a corner from former Wrexham midfielder Whalley.

"We've gone out of the FA Trophy as holders with a whimper. We didn't turn up today and [I'm] hugely disappointed.

"We were playing a good team, probably the toughest draw in the draw to come away to Luton.

"I played a strong team because we need to get back to winning ways and I don't know if some of them thought they too big for the second round of the Trophy.

"We weren't at it right from the start."

"I think everyone can look back at their performance and say I've done my bit for the team today. Absolutely perfect, I was really pleased.

"We thought it might be a bit more difficult second half, but our energy levels were so good, that I think we just had a bit too much running power for them.

"We're going to need everyone between now and the end of the season. Christmas is a difficult period game wise, and it's good that everyone's in form."