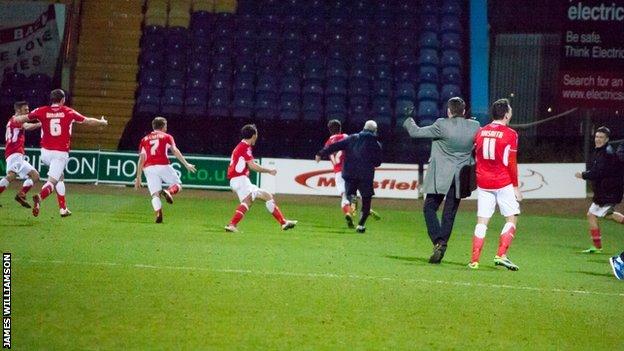 John McCombe put the Stags ahead when he shot home on the rebound after his initial header hit the bar.

Kal Naismith levelled with a deflected shot after the break, but McCombe again netted with a rebound strike.

However Stanley secured an unlikely win through Naismith's low poked effort and a fierce shot from James Gray.

The double late blow leaves Mansfield without a win in 12 games and in 19th place in the League Two table.

Accrington have 23 points and are a point and two places above the Stags.

"It was an amazing experience. A couple of lads have said that's the best thing they've experienced in their lives.

"I don't think there's anything quite like being 2-1 down after 90 minutes and coming back to win 3-2. The lads are buzzing."