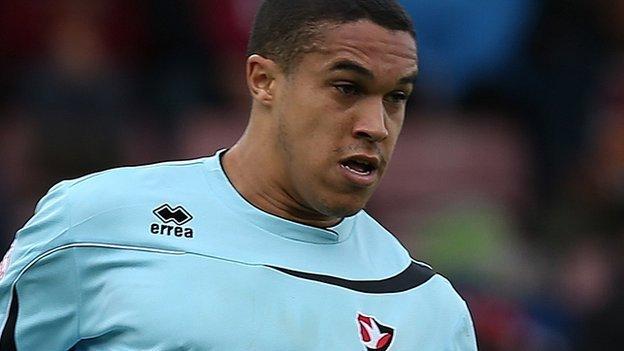 Cheltenham extended their unbeaten run to 10 league games with victory at high-flying Fleetwood.

With less than a minute on the clock, Matt Richards's corner to the near post was nodded home by Troy Brown.

But Jermaine McGlashan rounded Fleetwood keeper Scott Davies in the 93rd minute to wrap up the win.

"It was disappointing to lose that early goal. It was before we'd even started.

"It put us on the back foot but we responded greatly to it. I thought we created opportunities and we had chances to equalise.

"But goals change games. Unfortunately we didn't get the goal and they got one in the last minute when we were all out attack."

"We scored after 30 seconds and scored with 30 seconds to go. I thought we were excellent and we are looking a good team at the moment.

"We passed and kept the ball well, I always felt comfortable and I can't always say that. I didn't feel that we were going to concede and I also felt we had a few more goals in us.

"The lads at the moment are doing things when they should, and doing it at the right time."