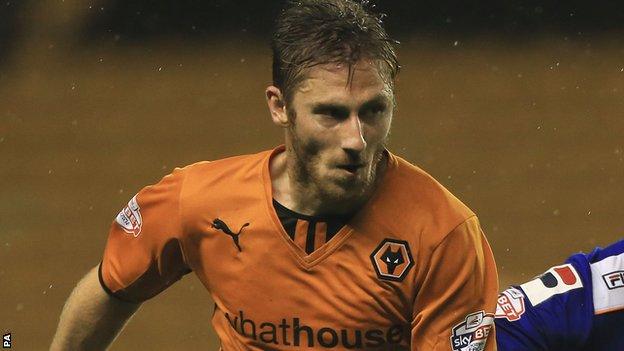 Danny Batth headed the visitors ahead but Nouha Dicko, who played four times during a loan spell at Molineux last season, turned in an equaliser.

Ben Pringle crossed for Kieran Agard to put the Millers in front and striker Dicko's chested second made it 3-1.

Nouha Dicko failed to score on his Rotherham debut, but has found the net in each of his five subsequent appearances for the Millers

With at home to Crawley, a Wolves victory would have been enough to take Kenny Jackett's side back to the top of League One, but the O's remain at the summit on goal difference.

Rotherham, who missed out on a fourth successive league win, remain in a play-off spot.

The hosts dominated the first 45 minutes but fell behind when centre-back Batth met Henry's free-kick to net his first goal of the season.

However, the Millers were soon level when Pringle - who created all three Rotherham goals - crossed for Dicko and they took a deserved lead into the interval when Agard nodded in Pringle's deep delivery.

After the break, Dicko made it six goals in six appearances since his loan move from Wigan, but Wolves clawed a goal back when referee Michael Oliver spotted an infringement in the penalty area and winger Sako fired in from the spot.

And they levelled when substitute Leigh Griffiths and David Edwards set up Millwall loanee Henry to slide the ball past home goalkeeper Adam Collin.