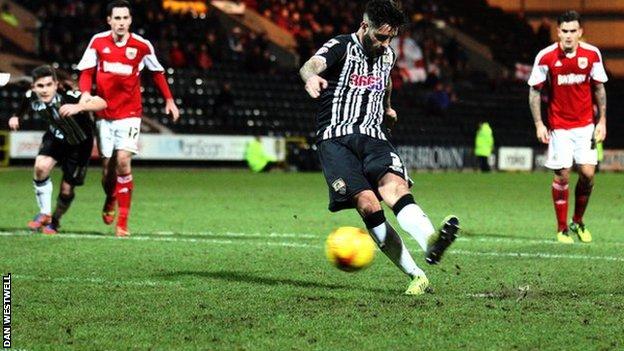 The Robins, who saw Louis Carey make a record-equalling 645th club appearance, seemed set to climb off the foot of the table thanks to Sam Baldock's penalty.

But Notts defender Dean Leacock made amends for pushing Aden Flint to concede the first-half spot-kick.

Leacock was held by Marvin Elliott and Sheehan netted from the spot to ensure City stay bottom of the league.

"I think it was probably a drawn game. When you look at it all the stats stack up as possession even, they had probably two more shots than we had as well as one more corner.

"[They were] two of the softest penalties that you'll see. Ours was a soft one if that was a penalty he should have given us two.

"We could have gone in at half-time 3-0 up. We've had two great chances before the goal, and if we put them away then it's a different game completely. We do have to be more ruthless when we get our chances."

Shots on Target
Home4
Away9