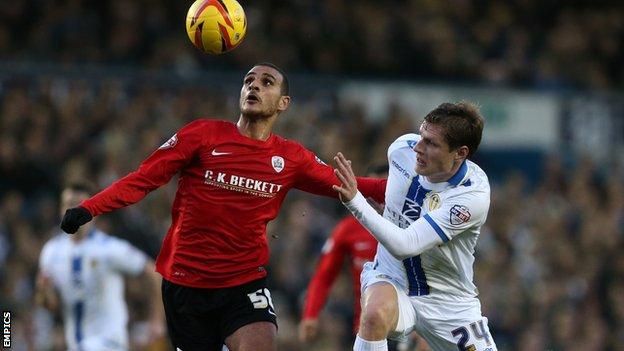 Barnsley remain bottom of the Championship despite a hard-fought draw at Yorkshire rivals Leeds in Danny Wilson's first game back in charge.

Wilson, who returned to Oakwell earlier this week, watched his team earn only their fifth away point of the season.

The hosts dominated after Tudgay was sent off for a high tackle in the late stages, but could not find a winner.

Danny Wilson's last match in charge of Barnsley was a 2-0 home defeat by Manchester United in May 1998, their last match of their only season in the top flight

But the Whites, who were aiming for a sixth home win in seven attempts, still moved above Reading and up to fifth courtesy of Wigan's 2-1 victory at the Madejski Stadium.

Leeds had won only one of their last six matches against Barnsley and ex-Oldham striker Smith should have scored twice in the opening 12 minutes.

Jason Pearce launched a long ball to the 6ft 6in striker, who smartly chested down before seeing his fierce shot blocked at point-blank range by Barnsley goalkeeper Jack Butland.

Moments later, Smith was put clean through again and this time he could only prod the ball tamely at the England international.

Barnsley, who lost eight of their previous 10 away matches, almost took the lead when Tudgay managed to hold off a weak challenge from Leeds defender Marius Zaliukas before shooting wide.

Leeds needed to improve their supply to leading scorer Ross McCormack after the break but when the Scotland international eventually had a chance from 15 yards he shot straight at Butland.

Following Tudgay's red card for a high challenge on Zaliukas, Leeds upped the tempo with Danny Pugh's weak shot being their clearest sight of the Barnsley goal.

"It was a red card offence [Tudgay's sending off].

"It was not a good tackle. Danny will be disappointed when he sees the tackle again and so will the player who went over the ball.

"If Barnsley play like they did, they have a major chance of staying up, but with so many matches to play and so many twists and turns to come, no-one can make those calls."

"It was a very good performance. For large parts of the first half we played really well after our keeper had made a good save.

"We made some chances and if one of them had gone in it would have given us an even bigger incentive.

"We had to defend in great numbers, which is to be expected when you come to Leeds. McDermott has put a good team together and there is no doubt in my mind that they will be right up there come the end of the season."