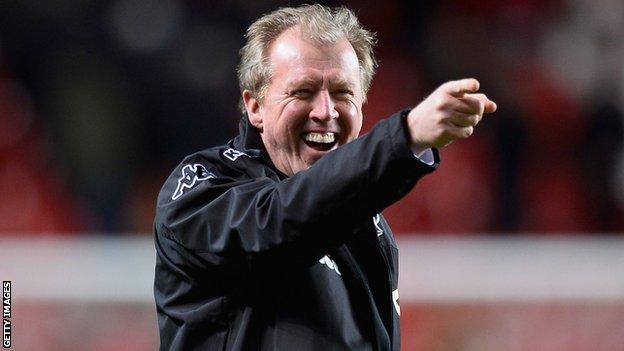 Derby's impressive form under Steve McClaren continued against Doncaster as they recorded seven consecutive league wins for the first time since 1995.

Goals from Jamie Ward, Simon Dawkins and Craig Bryson secured the points for the Rams who are now just three points outside the automatic promotion spots.

The hosts could even afford the luxury of a missed penalty from Chris Martin and a Jake Buxton own goal.

Derby have lost once since McClaren replaced Nigel Clough in charge.

Doncaster handed Derby the initiative early on when Luke McCullough failed to deal with a bouncing ball on the edge of his area which allowed Martin to pounce and play in Ward, who rolled the ball past Ross Turnbull from eight yards.

Striker Theo Robinson, who left Derby for Doncaster in August, had a shot deflected over in the 22nd minute and ex-England boss McClaren was forced to make a change in defence three minutes later when skipper Richard Keogh was replaced by Michael Keane.

The Rams were then awarded a penalty when McCullough barged over Martin after Bryson's pass opened up Doncaster's defence. However, Turnbull guessed correctly and dived to his right to save Martin's spot-kick.

Doncaster, without a win since a 2-1 victory over QPR last month, had played some neat passing football in the first half without seriously threatening the Derby goal but they had two chances to equalise at the start of the second.

Those misses cost the visitors in the 50th minute when Derby increased their lead.

Dawkins, on loan from Tottenham, picked up the ball just outside the centre circle and ran at a retreating defence before firing low past Turnbull from just inside the area.

Doncaster pulled one back when Buxton headed a cross into his own net under pressure but Derby restored their two-goal cushion when a clever pass by Martin sent Bryson into the area and the midfielder placed his shot inside Turnbull's left-hand post from 12 yards.

"I don't want to dampen expectations. I want there to be a buzz because that's what fans want but in the dressing room and the training ground, it's business as normal.

"As long as we stay that way and keep our feet on the ground, we can continue winning but the time we get sloppy and think we've made it, this game has a habit of cutting your legs off.

"It's a big concern [captain Richard Keogh's knee injury] because he's been terrific for us. He locked and jarred his knee but hopefully it's not too serious and we'll know more on Monday or Tuesday."

"That's two weeks running that we've played ever so well. We came to a team whose form shows they are the best in the division at the minute and really took the game to them and caused them problems.

"Some of our football, especially in the second half, was top class. You talk about game defining moments and Theo [Robinson] was clean through and within seconds we are two nil down.

"There are lots of positives, they are one of the best passing teams in this division and we have more than matched them and out-passed them at times."