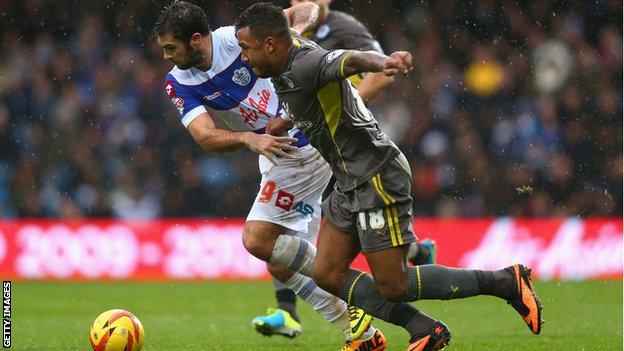 But Vardy hit the winner when he collected David Nugent's flick-on and fired a low strike past Rob Green.

QPR midfielder Joey Barton was sent off late on after being booked twice in a minute.

Barton had been cautioned in the 84th minute for a challenge on Gary Taylor-Fletcher and was then shown a second yellow card seconds later after kicking the ball at the same player.

QPR had the majority of the opportunities and possession but their inability to convert their chances proved costly.

The hosts made a bright start as Schmeichel, who was excellent throughout, saved O'Neil's low effort from 18 yards and parried Kranjcar's powerful 25-yard strike.

But there was a moment of light relief in the first half as a squirrel stopped play for four minutes after running onto the Loftus Road pitch.

Leicester striker Nugent chased after the animal in an attempt to get it off the pitch, but his efforts were unsuccessful before the squirrel was caught by the ground staff and carried off.

But Leicester, who had only taken one point from their previous three league matches, went ahead when Schmeichel's goal kick was flicked on by Nugent, before Vardy out-paced defender Richard Dunne and shot past Green.

The hosts continued to create chances with Matt Phillips chipping over the bar and Benoit Assou-Ekotto wasting a good opportunity by over-hitting a cross. An angry confrontation followed between Assou-Ekotto and Austin, who had been expecting a pass, with the team-mates having to be separated.

QPR again dominated possession in the second half but Leicester defended deeply and frustrated the hosts.

However, the visitors nearly doubled their lead in the 78th minute when a shot from Matty James took a deflection off Dunne and bounced off the crossbar.

Barton was needlessly sent off with only six minutes remaining on a frustrating day for the hosts.

"It was always going to be important to get something out of the game today, so to get away from here with three points is a very good return.

"They are a good side. I felt we created good opportunities, but they will probably feel they should have got something out of the game, especially after the first-half situations they had. We are delighted.

"We've only scored one goal again, but the key is that we've actually kept a clean sheet and we've not kept enough of those this season."

"Joey Barton seems to be the focus on lots of things. He had already had conversations with the ref.

"He seems to be the focal point and, in his position, he can't afford to put himself up for anything, really. His reputation doesn't do him any favours, for sure."