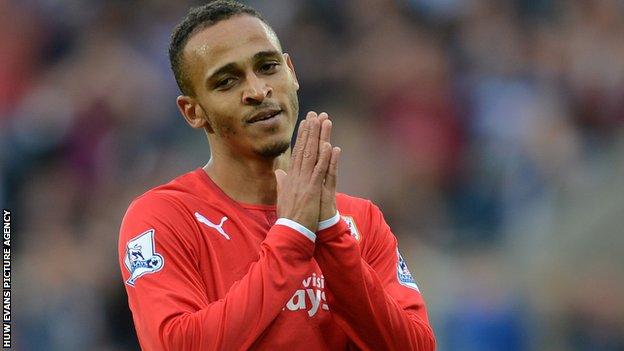 Malky Mackay says Peter Odemwingie is "a joy to work with" ahead of Cardiff City's clash with the striker's old club West Brom.

His spell at the Hawthorns turned sour after he failed in a bid to force a move to QPR in January 2012.

The Nigeria international was criticised in the wake of the collapsed move but Mackay has only positive things to say about the 32-year-old.

"We did our homework on him," Mackay said.

"Had he not been the right kind of person, I wouldn't have brought him in."

The boy I have met and I have here is articulate, he speaks four or five different languages, he is intelligent, he has smiled since the day he arrived here and he is very polite too

Odemwingie moved to Cardiff during the summer transfer window but gained notoriety following a failed move to QPR in the previous January window.

He drove to QPR on deadline-day in a bid to secure a move, only for the deal to fall apart. West Brom manager Steve Clarke said at the time the player had been "very, very badly advised" by his agents.

The former Lokomotiv Moscow player has so far made 12 appearances and scored two goals for Cardiff, and Mackay has been pleased with his summer signing.

"There was a lot of press around Peter concerning that January, in terms of his on-off transfer to QPR," Mackay added.

"He obviously took a lot of stick over that, but I can only speak about the lad that I know.

"I phoned up certain people who played with him and coached him and managed him and they were glowing.

"If they hadn't been, that would have given me cause for concern.

"The boy I have met and I have here is articulate, he speaks four or five different languages, he is intelligent, he has smiled since the day he arrived here and he is very polite too.

"He is a talented footballer and definitely wants to do well for us.

"He has been a joy to work with and he wants to do the best he can for the club, so it has been a really good one for us."

Cardiff go into Saturday's game 16th in the table, a point clear of the relegation zone, and on a five-game winless streak.