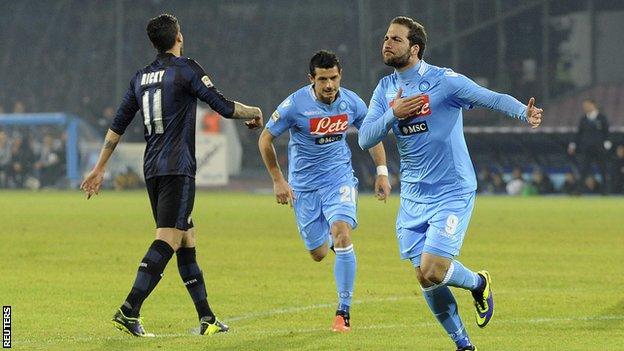 Napoli inflicted 10-man Inter Milan's second Serie A defeat of the season in a gripping match at Stadio San Paolo.

A five-goal first half saw Gonzalo Higuain volley Napoli in front only for Esteban Cambiasso to equalise.

Rafael Benitez's men went two-goals up after Dries Mertens and Blerim Dzemaili struck, only for Yuto Nagatomo to give Inter hope with a tap-in.

Walter Mazzarri ended a four-year spell in charge of Napoli this summer, in which he re-established the Neapolitans as a force in Serie A.

Rafael Benitez had less fond memories of his time with Inter, with whom he won the Fifa Club World Cup but was dismissed after a disappointing six-month period.

Benitez, who was sacked by Inter after a difficult six-month spell in 2010, was also facing his former club

The Spaniard also had to deal with his side's midweek Champions League exit after being denied knockout stage qualification by Borussia Dortmund despite beating Arsenal 2-0.

Regardless, the result saw third-placed Napoli open up a seven-point gap to their fifth-placed opponents. This difference could prove valuable in the months ahead as third is the final qualifying spot for Europe's premier club competition in the Italian top flight.

Mazzarri's return to Naples after deciding to end a four-year spell in charge this summer appeared to be going well when his new team started the brighter, only for Higuain to volley in expertly after latching on to a sloppy Nagatomo header in the host's opening attack.

Cambiasso levelled things after sweeping home a flowing counter-attack, only for Mertens to fire in first time from the edge of the box and Dzemaili to double the advantage after reacting quickest to a fine Samir Handanovic save.

Nagatomo then made amends for his poor defensive error with a tap-in following a smart cross from the impressive Fredy Guarin, before the referee called time on a thrilling first 45 minutes.

Inter's push for an equaliser was tempered with 20 minutes to play as midfielder Alvarez was harshly dismissed for a second booking after handling the ball.

With the Nerazzurri now weakened, former Real Madrid forward Callejon found his seventh league goal of the season after being presented with the easiest of finishes by Lorenzo Insigne's drive across goal.

There was even time for ex-Inter man Goran Pandev to miss a penalty before the final whistle signalled an impressive victory for Benitez's challengers.