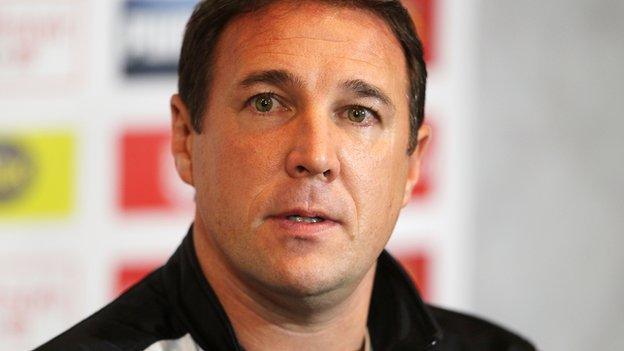 Cardiff City boss Malky Mackay says he has been surprised by the recent fixing allegations in English football.

"It's something we've got to be vigilant about. If people are found guilty, there's got to be severe punishment." he said.

Alan Shearer says there needs to be a "zero tolerance" policy to anyone guilty of fixing in football matches.

The former England striker said: "It just cannot happen. If anyone is found guilty then there should be zero tolerance."

Six people, including Blackburn Rovers striker DJ Campbell, were arrested on Sunday over fixing allegations in the sport and have been bailed until April.

The arrests were made following a story in the Sun newspaper on Sunday in which ex-Portsmouth player Sam Sodje told an undercover reporter he could arrange yellow and red cards in exchange for cash.

The men were arrested as part of a National Crime Agency (NCA) investigation into an alleged international betting syndicate.

They are suspected of conspiring to influence the course of football matches in Manchester and elsewhere between 1 November and 26 November this year.

Earlier this season, Fenerbahce, Besiktas and Metalist Kharkiv were all banned from European competition for match fixing.

An 11-point plan designed to tackle match fixing will be distributed by football's European governing body Uefa to all 54 European football associations.

Mackay said he had never been approached to fix matches.

"It's not something that's hit the highest level yet but it has in other countries," Mackay said.

"The game in Britain has always been held in very high regard in world football.

"It's something that's very much frowned upon in this country."