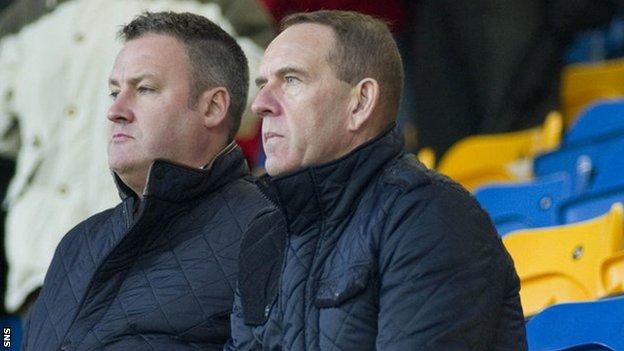 will remain in charge of the side for Saturday's Championship trip to face Alloa Athletic.

Thereafter, Hopkin will return to his job as development manager while assisting in first-team training.

In a website statement, the club stated: "He has been brought in to keep Morton in the Championship."

The Greenock outfit sit bottom of the table, two points adrift of Cowdenbeath and a further seven behind Dumbarton and Queen of the South.

Shiels, who had been youth coach at Tranmere Rovers, joined Kilmarnock as assistant manager to Mixu Paatelainen in 2010 before taking charge a year later.

However, the 57-year-old Northern Irishman was

He takes over at Cappielow from Moore, who had been with Morton since 2010.

Shiels was believed to be on the shortlist to take over at Inverness Caledonian Thistle, but the Premiership outfit instead chose John Hughes.

Shortly before that announcement, Shiels had told BBC Scotland that he

Morton lost two games under Hopkin, losing then with Shiels watching from the Cappielow stand.