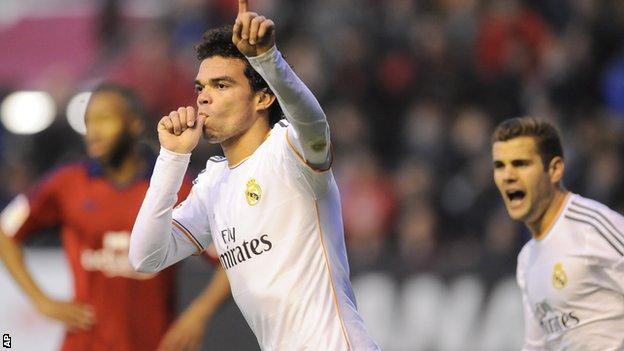 Real Madrid fought back from 2-0 down with 10 men to rescue a point in a thrilling 2-2 draw at lowly Osasuna.

Two headers from Oriol Riera put the hosts in command before Real defender Sergio Ramos was sent off before half-time for two bookable offences.

Isco halved the deficit moments after Ramos' dismissal to give Madrid hope.

Osasuna also played the final 12 minutes with 10 men after Francisco Silva was sent off before Pepe headed in the equaliser.

But Saturday's draw saw Carlo Ancelotti's team, who are third behind leaders Barcelona and Atletico Madrid, drop more points in the title race.

They are five points adrift of arch rivals Barca, who won 2-1 against visitors Villarreal.

Madrid have now only won once in their last six visits to Pamplona, but having scored 24 goals in their previous five league games, they started the game confidently.

Cristiano Ronaldo dragged an early shot wide before the hosts went ahead with virtually their first attack of the game.

Marc Bertran's excellent in-swinging cross was met by the unmarked Riera at the back post.

The Osasuna striker doubled their advantage six minutes before half-time by nodding into an empty net after a fine save from Real goalkeeper Diego Lopez.

Ramos was sent off for the 18th time in his Madrid career after clashing with Osasuna midfielder Roberto Torres, but his team pulled a goal back when Isco blasted into the bottom corner from 20 yards.

As his side toiled after the break, Ancelotti decided to withdraw Gareth Bale before the hour mark as Argentina winger Angel di Maria replaced the Welshman.

Osasuna were also reduced to 10 men when Silva dived in on Ronaldo and was rightly shown his second yellow card of the match.

And his team were punished from the resulting free-kick as Pepe climbed highest to power Isco's cross into the bottom corner.