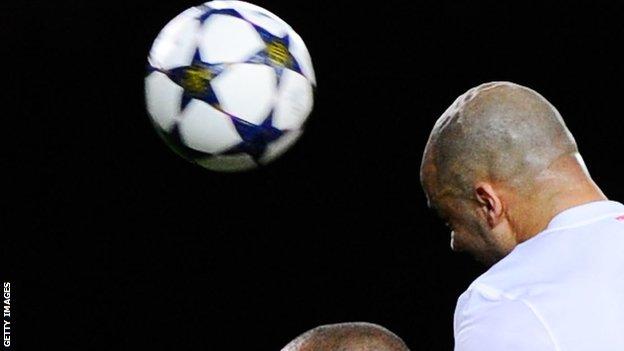 A leading campaigner on head injuries in sport has called for a ban on children heading the ball when playing football.

Chris Nowinski is a former professional wrestler and suffered from concussion because of regular blows to the head when playing college American football.

He also said that children should not be allowed to play contact sports.

He added: "If we have so many other options out there, like we get them running and being active, why play sports which include hundreds of blows to the head, knowing how bad the consequences are?

"It's much smarter to do it when they're teenagers and in their 20s when the brain is more developed and there are medical people on the sidelines during games.

"We can still play those games without contact but who thinks it's a good idea to hit a 10-year-old in the head 200 or 300 times a season?"

Nowinski suffered a serious concussion in June 2003, but due to a lack of understanding about his symptoms, he continued to wrestle and work out for five weeks while symptomatic.

He developed post-concussion syndrome and was forced to retire.

Since then, he has co-founded the Sports Legacy Institute (SLI), a non-profit organisation dedicated to studying sports concussion through education, policy, and research.

Nowinski added that the concussion doctor who treated him said "no sport should have repetitive brain trauma and tolerate it before they reach high school, age 14".

He said: "A new study came out in the US two days ago showing repetitive brain trauma is still causing brain damage.

"Based on all this research, we know we're giving some of those kids a chance of brain damage because we choose to introduce contact so young."

Part of that work sees them study the brains of deceased athletes to try to learn about the long term effects of repeated concussions. They started out studying NFL players but now do most contact sports

Nowinski adds that children need to be better educated about the symptoms of concussion.

He said: "Why not make it as safe as we can, as long as entertainment value is there? We have to consider most of the people playing that sport are children.

"Study after study will tell you that athletes don't report when they have concussion and try to play through to be a hero - but they don't realise they have a concussion as no one has sat them down and explained what it is."

"In our sport, what we're doing is trying to protect the athlete where there is a risk," he said.

Rugby's new guidelines say a player suspected of suffering from concussion must leave the field for a medical inspection and can only return if cleared of the injury.

Previously, any player suspected of suffering from concussion had to leave the pitch and take a week off, a period already reduced from three weeks under an earlier rule.

In October, Tottenham were described as "irresponsible" by brain injury charity Headway for allowing goalkeeper Hugo Lloris to play on against Everton after losing consciousness.

But Headway spokesman Luke Griggs said that banning children from heading in football was not the answer.

Griggs told BBC Sport: "For us, the key is not being as drastic as to ban children from contact sport. It's more about improving awareness among coaches, referees and, importantly, parents. A minor injury can have consequences so it's about dealing with them immediately, so we need to raise awareness.

"There is limited research which shows the danger of heading and it will need more research before we contemplate supporting that. There is merit in what Chris says, but banning kids is not the way forward. It's about awareness."

The Football Association declined to comment. However, England's governing body use size three balls until Under 15 level, when size five balls are introduced.