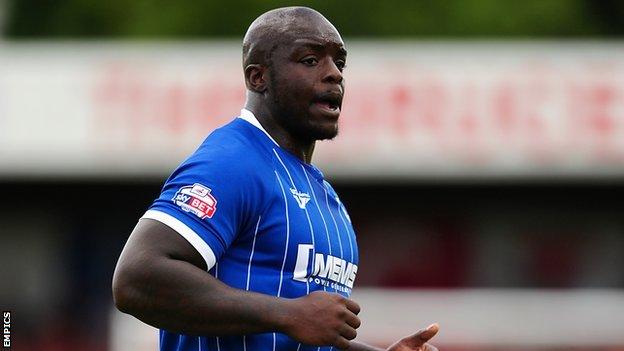 Akinfenwa put Gills ahead with a fierce shot from inside the box.

Tranmere's Jim McNulty was sent off 10 minutes after the break for bringing down Cody McDonald when clean through.

Akinfenwa's close-range second doubled the lead before Ryan Lowe rounded Stuart Nelson to tap into an empty net to give Tranmere late hope.

It was Gillingham's first win in four games, while Tranmere sit two points above the bottom four.

"It was a tough night. If you put their two centre-backs in our team, we win the game. We can't defend. If you can't defend, you don't win games.

"We've got two guys who think they're footballers. They're centre-backs and their living is to head it and kick it.

"We always looked like we were going to get a goal, but every time they went forward, they looked they were going to score. That's the way it's been for the last few weeks."

"We made awfully hard work of it. The effort was fantastic. We conceded a bad goal to make it a nervy finish and we have to do better than that.

"But overall I've got to be pleased with three points. We've just got to take our chances a bit more.

"I thought last Saturday there was a good feeling. The supporters played a massive part and gave us the confidence to come here and put on a massive performance."