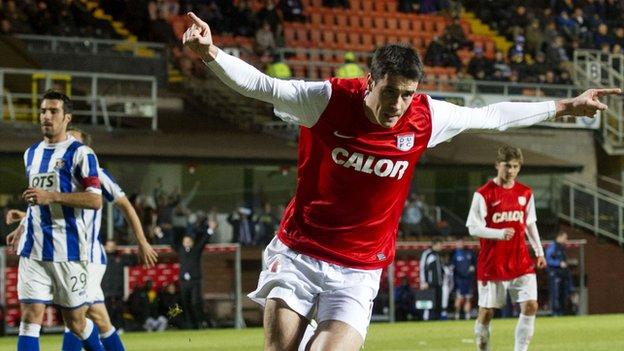 Goalkeeper Craig Samson has urged Kilmarnock not to be overly concerned about facing a Dundee United side who have scored 17 goals in four games.

It is the first time a United side has hit the net four or more times in four consecutive games since 1936.

Kilmarnock, meanwhile, have conceded 13 in their last five outings, including

"We can't worry about what they're going to do as much as worrying about ourselves," Samson told BBC Scotland.

It gives us the chance to try for revenge for the Cup defeat. It wasn't really a 5-2 game on reflection

"We've got to into the game and try and put our stamp on the game.

"We've got to try and defend as a team, but we've also got to be a threat going forward.

"We're not going to sit there and let Dundee United have it all their own way.

"We've got to try and create chances for Kris Boyd or young Chrissy Johnston, who's chipped in with goals recently."

Samson also insists that the Cup result was not a fair indication of the balance of play at Tannadice a fortnight ago.

"It gives us the chance to try for revenge for the Cup defeat," he said. "It wasn't really a 5-2 game on reflection.

"We've watched parts of it again and we know the things we did well, but hopefully we can go into this game and try and eliminate the mistakes and get a result.

"As a goalkeeper, you don't want to lose any goals. But, as a team, we've worked on it to try to eradicate the errors we've been making."

The regular changing of personnel, particularly in the Killie defence, has not helped their cause.

With captain Manual Pascali available this weekend after suspension and Darren Barr fit to return, further change is likely for the visit of United.

Both missed the Ayrshire side's last weekend and now

Youngsters Lee Ashcroft and Jackson Irvine formed the central defensive partnership as his side ended a run of four defeats.

"I don't think we've had a settled back four due to certain circumstances," added Samson.

"We've had injuries and suspensions to contend with, but big Lee Ashcroft came in against Ross County and he was excellent.

"So it shows we do have players that can come in and do a job.

"It's just a case of trying to get it settled, the way we want to play together, and try to win games."