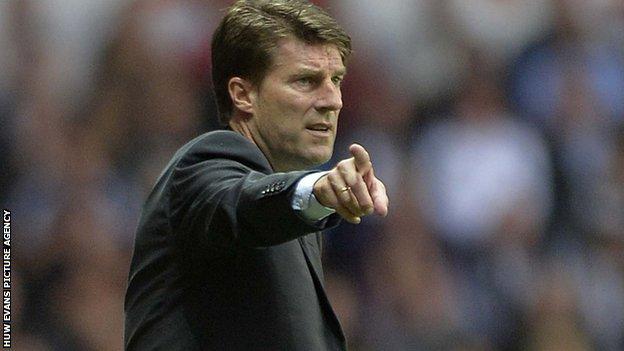 Swansea boss Michael Laudrup was upset to lose to St Gallen in the Europa League but said his side deserve their place in the knock-out stages.

The Swans needed a point to guarantee qualification from their final Group A game but progressed in second place as Kuban Krasnodar only drew in Valencia.

In the knock-out stage everything can happen. If you have two good nights you move on, even if you play a stronger team

The Welsh side will discover their last-32 opponents on Monday.

"I'm never happy when we lose but we went through," Laudrup said. "After the draw we will feel differently."

He added: "We're there, that's the most important thing.

"You can always take things out from these games and say we should have done more, but we are through."

Swansea had started with group wins in Valencia and at home to St Gallen but secured only two points in their final four games.

Benfica, Napoli and Juventus are among the teams who will join the competition in February having dropped out of the Champions League - but Laudrup believes his side can progress further.

"We are there because we deserve to be there," he said. "In the knock-out stage everything can happen.

"If you have two good nights you move on, even if you play a stronger team. If you have one or one-and-a-half or two bad nights then you're out against whoever you play.

"That's the difference from the group stage to the knock-out phase."