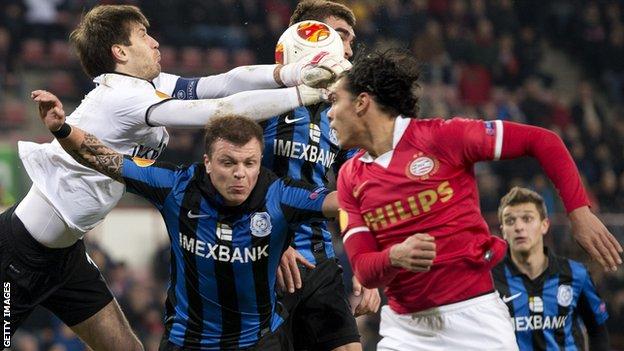 PSV Eindhoven were eliminated from the Europa League at the group stage after the Dutch side lost to Chornomorets.

Frank Dja Djedje scored the only goal of the game to give the Ukrainians the win that sealed progression from Group B ahead of Dutch side PSV.

Maccabi Tel Aviv made sure of second in Group F by beating French side Bordeaux 1-0.

Europa League round of 32

Eran Zahavi's late penalty secured the three points for the Israel side, while Stephane Schrock and Constant Djakpa scored as group winners Eintracht Frankfurt of Germany beatCyprus side APOEL 2-0.

Ludogorets had already gone into the final round of group games as Group B winners, but they finished their campaign with a 2-1 win at Dinamo Zagreb. Duje Cop and Roman Bezjak scored for the Bulgarians.

In Group C, Salzburg went into the match assured of top spot but the Austrians ensured they completed the group stage with a 100% record by beating Esbjerg of Denmark 3-0. Sadio Mane scored a brace while Kevin Kampl was also on the scoresheet.

Esbjerg were already assured of second place so Swedish side Elfsborg's 3-1 win at Standard Liege of Belgium was irrelevant.

Dynamo Kiev of Ukraine came out on top in a battle for second place in Group G as they beat Austrians SK Rapid Vienna 3-1. Terrence Boyd had put Vienna ahead, but goals from Jeremain Lens, Oleg Gusev and Miguel Veloso gave Dynamo victory. Belgian side Genk, who had already won the group, edged Thun of Switzerland 1-0.

Spaniards Sevilla cemented top spot in Group H as the Spaniards beat FC Freiburg 2-0 in Germany. Freiburg missed out on a place in the round of 32 as Czech side Slovan Liberec took second with a 2-1 win at Estoril of Portugal.

Lyon and Betis progressed from Group I. French side Lyon finished top by coming from behind to defeat Portuguese side Vitoria Guimaraes 2-1, while Spanish side Betis drew 0-0 with Croatians HNK Rijeka.

Italians Lazio go through second in Group J after their goalless draw with Turkish side Trabzonspor, who won the group.

AZ Alkmaar of the Netherlands and PAOK Salonika both progressed from Group G as they drew 2-2 in Greece.

Group K winners Tottenham made it six wins from six with a 4-1 victory against Russia's Anzhi Makhachkala, who finished second.

The draw for the round of 32 takes place on Monday at 12:00 GMT, with the first and second leg fixtures played on the 20 and 27 February next year.